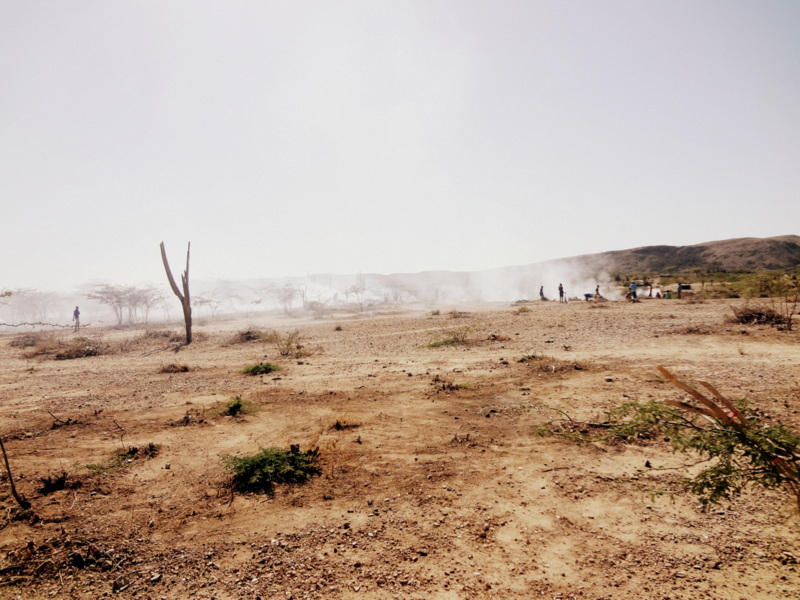 Barren?  Or full of potential?

I suppose it depends on perspective….on a knowledge of what has been and a dream for what can be…on the ability to envision what cannot yet be seen, and to see beyond each individual step.

You’ve seen this place before…

…only it looked quite different.

This picture was taken several weeks prior in the same location.

And here’s another “Before”…

(To get your bearings in the two photos above, note the crazy, side-leaning cactus.)

During the last week of Christmas/New Year’s vacation, Mezou (standing at almost-center with a shirt over his head, covering most of his face) mobilized the youth from the Plateau to do their part in the community clean-up work that has been going on over the past couple months.

This is the next generation–the generation that will inherit the Plateau.  It is THEIRS–their home, their backyard, their community, their future.  Already, groups of men and women had worked hard to clear out the thorns and brush.  (Read about it here, here, and here.) Manis now called upon the youth to get together and get involved in their community’s development and progress by undertaking the next step in the clean-up process.  So, under the direction of Mezou, that’s what they did.

The first step was to burn the piles of thorns and underbrush that have been drying in the sun ever since the previous groups of workers went through.

Next, they gathered and swept everything that had been left behind by the fires, and carried it away in wheelbarrows. The ash and debris was disposed of in a strategic location, usually as a barrier for rain water run-off.

Mezou set up four groups, each with its own leader.

Wilferne’s (red shirt) group and Obed’s (far right, blue shirt) group were responsible for the large section of land across the airstrip.

Jean-Kermy’s group worked hard to clean up a different section of land.

And Erla’s group (Erla is wearing the large hat above) was responsible for clean-up along the roadside.

They even neatly arranged the extra rocks into a sort of border along the road!

Even with the pictures, it is difficult to grasp the incredible change in the landscape.  Just weeks ago, this (above) was covered with thorns and underbrush.  Now–with the combined efforts of the brave folks plunging into the thorn thickets and the youth burning, sweeping and disposing of the piles of underbrush–it begins t0 look like a clean slate…a place of potential.