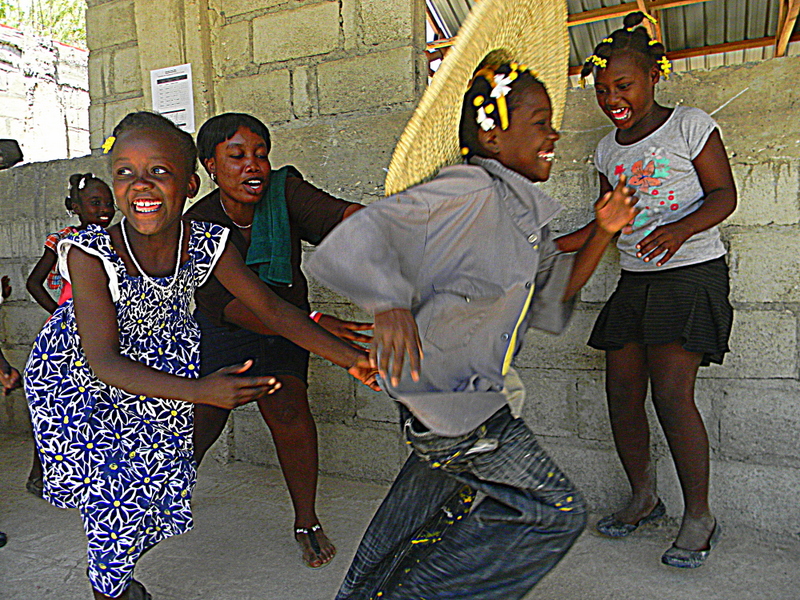 And last, but not least, the final installment in our “Catching Up” series.

As I mentioned in a previous blog post, the school put together a committee to organize activities for the students during the school year.  This past Friday, they held a “Recreational Day.”

They decorated a room especially for the occasion, and started out with chapel, as they usually do on Friday.

However, it was far from a usual Friday.  After chapel, all the kids lined up in the courtyard, and Judy taught them a dance to “Cotton-Eyed Joe.”  She even pulled the teachers in to help her demonstrate.

The kids LOVE to dance, and have a natural rhythm to anything with a beat.

Here is a video of them catching on to the steps.

As the rest of the kids danced it out, the two teams in the soccer final got themselves ready and pumped up for the game.

The intense, pre-game stare down…(if you look closely, you can see we were fighting hard to keep a straight face!)

After a while, all the soccer game pictures begin to look the same, so it was fun to take some artistic liberties with this one.

In the end, the sixth grade team took the championship…

…and fourth grade came in second.

But the day was far from over.  After lunch, the kids came back for another round of games, including this hilarious clothes race.

Each team had a set of clothing, which was, of course, much to big for them.  The first person in line had to dress up in all the items, run down the length of the porch and back, and take the clothes off as quickly as possible for the next team member.

Here is a little bit of how it went…

Mèt Simon (seen in the video) wasn’t the only one to break out into spontaneous dancing.

The day also included a quiz competition called “100 Questions for a Champion.”

The questions were drawn from a variety of categories, and the kids were given the specific information to study in preparation.

Richardson (pictured in the middle) emerged as the champion.

There were several other games, including water balloon tosses.

At one point, Judy threw water balloons into the midst of the crowd for them to catch.  Of course, they ended up exploding on people….and the kids were loving it (who wouldn’t?)!

Judging from the looks on their faces, I’d say they fully enjoyed their day.