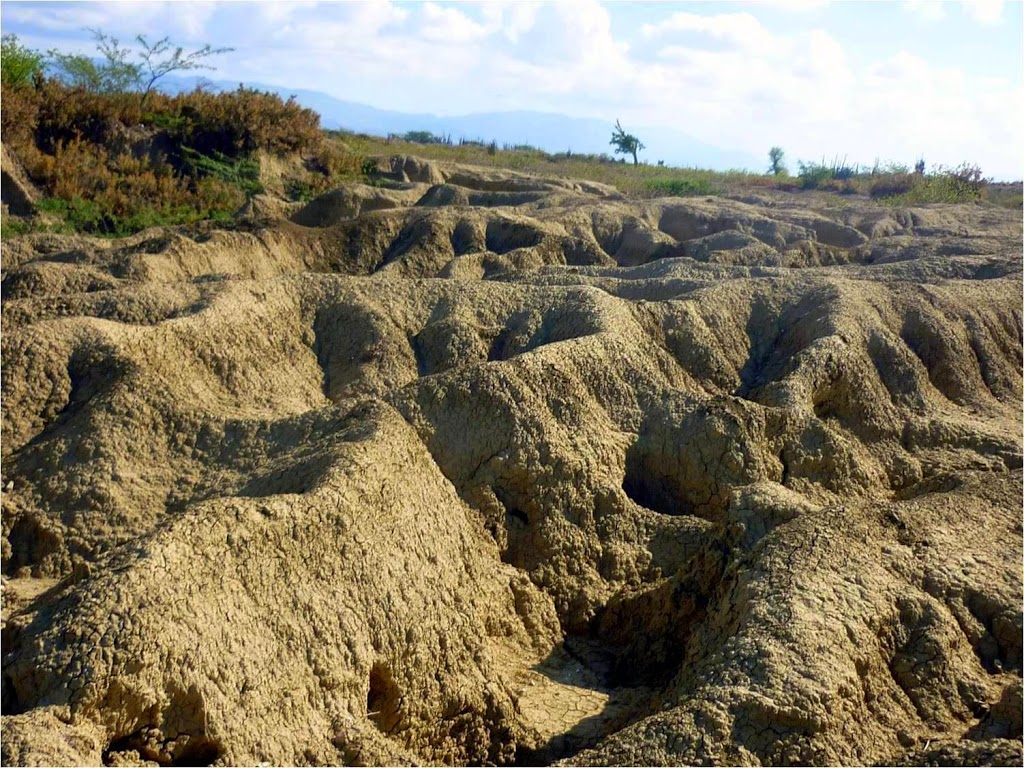 This used to be a garden…
It used to be green, and provide food.  Now, like so much of Haiti’s infamously deforested Northwest, it is a stripped and eroded wasteland.

Looks pretty bad.
Is it a lost cause?  We don’t think so.
But first a little history and context:
The history of Haiti’s deforestation began all the way back in the colonial period, escalating with the establishment of coffee plantations in the 1730’s.  Furthermore, after Haiti won its independence from the French in 1804, the government exported timber to help pay a heavy compensation due to France in the conditions of the treaty.

However, the primary modern cause of deforestation is the massive consumption of charcoal and firewood for cooking purposes.  “Charcoal and firewood provide 85 to 90 percent of Haiti’s energy for home and industiral use…” [Agroforestry and Sustainable Resource Conservation in Haiti: A Case Study].

Why is deforestation such a big deal? Not only is it just plain ugly, but it causes alarming soil erosion and even changes the climate.

Did you know that the trees of the Amazon rain forest generate up to 50% of the forest’s rainfall?  Now, imagine what would happen if you reduced the number of trees in the Amazon rainforest down to less than 2% of what they are now.  I’m sure someone can actually do that math, but you probably don’t need to in order to see that the rainfall would be drastically affected.  That is in fact what has happened in Haiti.

You may have seen images such as this one before, demonstrating the stark difference at the Haiti-Dominican border.  Haiti is on the left.
Once lush and forested, today less than 2% of Haiti’s land has tree cover.  Drought and erosion are not a happy combination.

“The most direct effect of deforestation was soil erosion. In turn, soil erosion lowered the productivity of the land, worsened droughts, and eventually led to desertification, all of which increased the pressure on the remaining land and trees.” [Library of Congress Country Studies: Haiti]

Led to desertification? Yeah, we get that; we look at it every day. (If only it were “dessertification”…)

When Samuel Schäfer first visited the Plateau in 2007, he looked at the stripped mountains, and envisioned living on those mountains and replanting them. (At the time, his thought was grapevines, as they tend to grow in dry climates by the sea.)

Several years later, Manis (who, consequently, remembers those very mountains when they were covered in trees) and Judy had been discussing an idea of purchasing parcels of the eroded, washed out land beyond the airstrip and planting mesquite trees.  If properly managed, these mesquite trees could still be used to make charcoal, but in a sustainable way without destroying the entire tree.  The land would slowly become forested, and the economy of the Plateau could be stimulated at the same time as families in need were given permission to cut portions of the trees to make charcoal.
Samuel heard Manis and Judy’s idea, and decided to take it on.  He has purchased a large parcel of the eroded land, and—working with a couple young guys from the area—has begun to give it a facelift.

He, Jean-Robert, Charilien, and Wisnik have cleared and leveled the land and arranged it into sunken plots to better hold rain water run-off.  This is no small task!

They also built a strong fence around it to keep out the extraordinarily determined goats (the bane of any green, non-poisonous thing) and other more innocent, hungry animals.

Already they have begun planting—casting the seeds of trees that can sprout and grow in the dry climate, including mesquite. Samuel plans to establish a tree nursery as well.
When Samuel leaves in 2016 to go back to Germany, he aims to have the trees growing, the nursery functioning, and management for the land and nursery established and running smoothly.  At that time, he will turn the project over to Lemuel.  Hopefully, as the people in our community see an example of the difference reforestation makes and the value in it, they will be inspired to take similar initiative in planting trees.
If you would like more details, or would like to donate to Samuel’s efforts, please visit his fundraising page at http://www.gofundme.com/Samuels-trees.

Can we keep dreaming?
One day, Lemuel would love to buy up the remaining land beyond the airstrip.  It’s quite a large expanse of barren land being rapidly eroded with each rainfall.  But let me paint the picture of what we envision it could look like:
Imagine a backhoe loader or some such machinery quickly and easily filling in the gullies with earth, levelling the ground, and arranging it into water-catching plots.  Picture fences being built and trees planted, starting with the tougher, drought-tolerant ones.  Then, as the trees grow, envision the land designated for different purposes: some for keeping livestock and chickens, some perhaps for grasses to feed the livestock, and some solely for trees.  People from the community find employment tending the trees and caring for the livestock.  These people/families build their house on the parcel for which they are accountable.  Using principles Lemuel already employs in the community in livestock projects, the trees or animals being tended begin not only to benefit Lemuel by supplying commodities (charcoal, meat, eggs, etc) and supplementary income, but also provide for the families.  Other families benefit too as Lemuel supplements livestock feed by purchasing the sorghum stalks left over after harvest, thereby increasing the value of yields.  And slowly, a desolate waste becomes a place sustaining life…
Beautiful picture?  Yes.  Easy?  No.  Fast?  No.
Possible?  Yes.  Absolutely guaranteed?  No.
The most urgent of our needs?  No.  Critical for the future?  Yes.
There are certainly some intimidating barriers to overcome.  There are other immediate and urgent needs all around us constantly screaming for our attention.  Resources are severely limited.
But without a dream, no vision develops.  And without vision, nothing changes.
And we would like at times not only to inform you of what is happening now, but to invite you into our crazy dreams for the future…into seeing things the way they could be. (Remember this post from a year ago: Running through Waist-High Mud…and Dreams?)
Some God may establish for His Kingdom; others, perhaps not or not yet.  Please pray for true, supernatural wisdom and humility for us as we juggle dreams and needs and limitations, seeking God’s will and glory in it all.
We haven’t reached the mountains….yet.