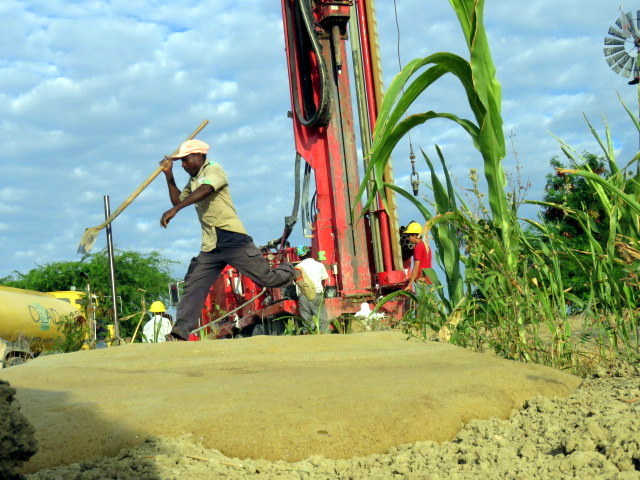 Judy, Ani, and I quickly piled into the car and rushed down to the Lemuel garden land.

The 6″ casing arrived at the site, but there was difficulty, since the hole had filled in again. (There is some explicable reason for this that has to do with the way the drill rig blows water and foam down to dig the hole.)

NOW, here is something cool.  (I mean, in addition to the fact that we hit water!)  Remember how on Day 3, we arrived at the unplanned site at night?  And remember how we just chose a place to drill that was close to the windmill and seemed most convenient?  (It was like, “Here or here?  I don’t know, I guess here. Ok, probably doesn’t make much difference.”)

Totally by “accident,” we ended up drilling in almost the exact middle of the sun!!!

It looks like careful, intentional planning…but we had no idea until the next day, AFTER they had begun drilling!

I don’t know about you, but I think God enjoys arranging these little details.

That evening in prayer meeting, a few people shared some things that God taught them during this week.  Of course, the subject soon centered around the well project. The major lesson shared was that we can so easily put our trust in people or in studies or in experts, but in the end, God is the one who decides what happens.  He is the one for us to look to and trust.  One person shared, “It is better to keep focused on ‘How does God want to do this?’ than to put all your hopes in what the experts say.”  Because in the end, He is the only one who decides what we find, and He does things the way HE wants to.
The place where we thought we had the best chance to find the most water turned out not to be so great. We found nothing at all at a second site.

Then, we ended up striking water in a location we had not planned to drill in the first place!

“To close our prayer meeting,” Manis said, “we are going to pray and thank God for the way He is doing things–for doing things this week exactly the way He wanted them done. No matter what happens, never doubt His power. We are going to thank Him for all the people who have worked tirelessly this week on this project. Then, we will just give the rest of the project to Him; the results are in His hands.”

Already–just as we asked–people are  learning more about God and glorifying Him as a result of this project!

The drillers returned home to Port-au-Prince for the weekend.  They will be back on Monday to clean out the hole on the Lemuel garden land and put down the casing.  Again, we cannot be sure exactly what we have until then, but their initial estimation comes to far more gal/minute than anything we have yet.  They will then move on to the final site.

I lift my eyes up to the hills.

Where does my help come from?

My help comes from the Lord, who made heaven and earth.