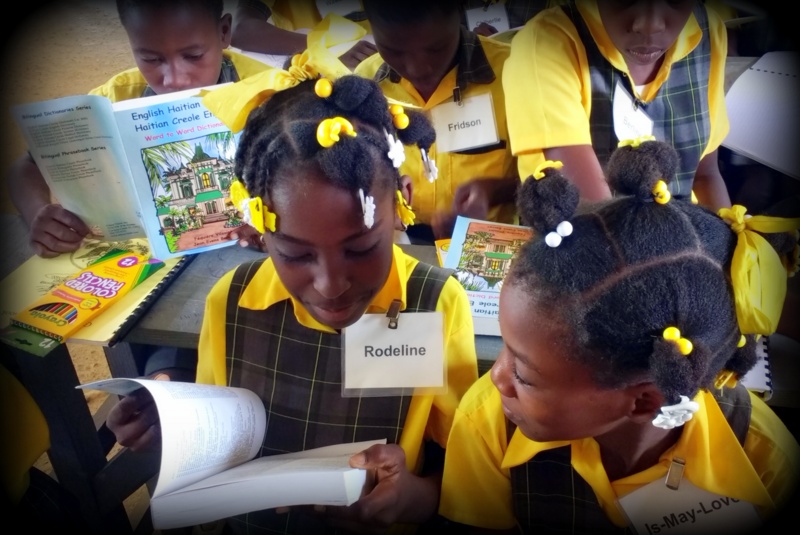 In mid-November, Pine Grove Community Church in Wisconsin came to do the first of the two annual English camps for the 2016-2017 school year.  Over the past years, members of Pine Grove have painstakingly constructed, taught, edited, and adapted a custom made English program to use from year to year, so that the language learning can build on itself in an intentional way.  English is a very useful language in Haiti, and it is a great benefit and privilege for the students to have so much exposure to it.

But, is it really making a difference in the students’ English capabilities?  Below, you will find a guest blog written by Katie, who was here for her second time:

…The last time we came was the December of 2014.  We tried a new format [at that time], and apparently it was awful (I did not think so, but it was my first time, and I had nothing to compare it to.)  The students, on the other hand, did not care about the format, they just wanted to learn.  And, did they ever.  As the grades progressed upwards, we observed that the kids who had been in previous English camps were more and more proficient.

I taught the 5th and 6th graders this time around, and I was impressed.  They remembered “Please,” “Thank you,” and “You’re welcome” with no prompting.  They also remembered “Sit down,” Stand up,” and “Open and close your book.”  They remembered colors, the English alphabet, and numbers–which was good, because I completely forgot to review numbers and would just tell them to turn to page 4 in their books.  And they understood and would.

We worked a lot on using English/Kreyol dictionaries; also on constructing sentences and having conversations.  The first day, they were a little reluctant, but each day they did better and better.  The highlight for me was when they gained the proficiency to make a joke in English.  I had a young man stand up, and [I] asked the class if he was strong.  Everybody said, “Yes, he is,” except one little girl who snorted with great disdain, “No, he is not.”  They also remembered songs from last year and requested to sing them.

Pastor Jeff noticed the same thing in his 3rd and 4th grade class.

He also had a young man try a joke on him.  Jeff was passing out snacks and the kids were saying, “Thank you”–except one little boy said, “Gracias,” and Jeff replied, “De nada,” and the boy was taken aback at Jeff’s linguistic prowess.

Miss Taleah and Miss Connie taught the 1st and 2nd graders.  They definitely noticed a difference in the comprehension levels of the 2nd graders who did the class last time and the 1st graders who had not done this before.

They were encouraged by how much improvements the 1st graders made from day to day.  Connie and Taleah made a big impact, as we were walking through the community and children would scream from their houses “Miss Taleah!  Miss Connie!!”  and would not stop until their teachers acknowledged them…

Their students also loved to be praised in English; to be told, “Good job,” meant a lot to them. When Wiltha and Rachele (their Haitian teachers) started saying it too, the students were very impressed.

Which brings me to our last observation.  The teachers and staff here at Lemuel have shown an increased desire to learn English, a noticeable improvement in their English, and more confidence in speaking English.  They were indispensable.  They were able to translate and clarify for us and made the classes much, much more successful.  We are very eager to see and especially to hear their continued progress next time we come!