Well, it has been a whole month since the Church here had its annual Harvest Festival (Fete Moisson) and Lemuel had it’s Leadership Retreat, but I finally got some pictures so I will post them even if they are a little late! 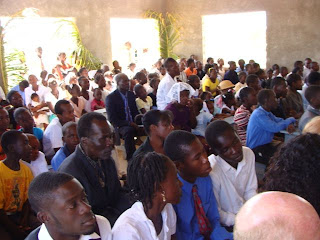 The church was packed with visitors from churches nearby and as far as Monaco! About 40 of our youth and staff from Port-au-Prince were here on the Leadership Retreat and were able to participate in the Harvest Festival. My Uncle and Aunt we also here from Monaco with a team of 4 people. 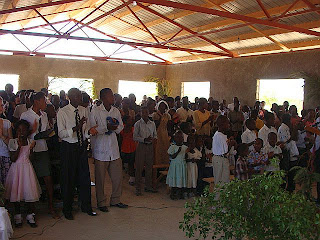 Another view of the full church. The school children did a dance to bring in baskets of fruits and vegetables. 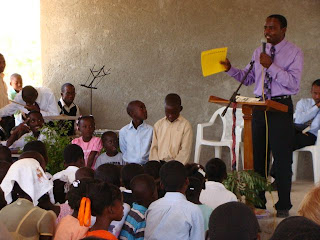 For a few months we had been having a competition going on Sunday nights between the families in the church. They got points for having their whole family there and for answering questions about the Sunday morning message, Wednesday Bible study and other things that had happened during the week. The family with the most points by the time of Fete Moisson would receive a water cistern to catch rain water from their roof or a latrine if they did not yet have one. These children won the prize for their mom (who was in the kitchen) all by themselves. The oldest, Jeffson, answered more questions than anyone else in the church! 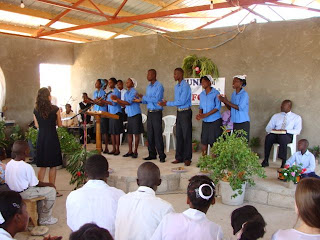 Krischelle Frost who is here for the year teaching English, has also been directing the church “choir”. They sang two special songs for Fete Moisson. 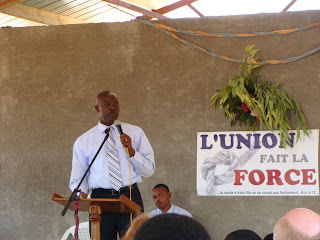 Wadestrant (Wawa) JnBaptiste, who graduated from Dallas Theological Seminary and currently teaches in the seminary in Port-au-Prince, preached for the Fete Moisson service. He also was one of our speakers for the Leadership Retreat. 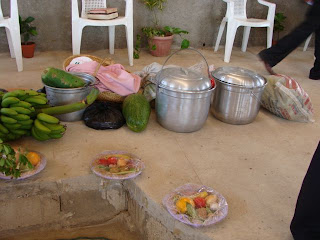 After the service the Harvest auction began. These are a few of the things that were brought to sell. All proceeds went to the church building project. 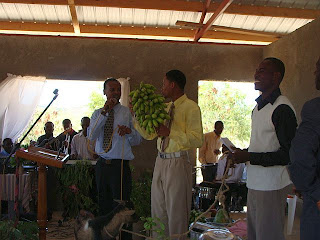 A whole “regime” of plantains was sold… 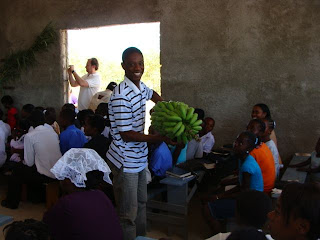 … and bought by Charles Rubens from Port-au-Prince. 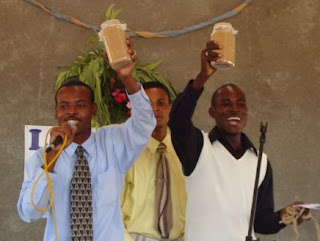 We had encouraged the ladies in the church to make different sweets to sell. Here they are auctioning “Chanmchanm” which is ground up peanuts, dried corn and sugar. It is REALLY good! 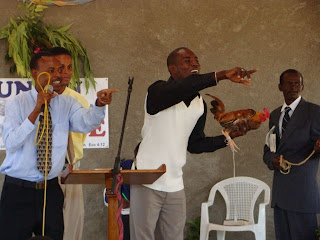 The rooster caused quite a flurry of bids… 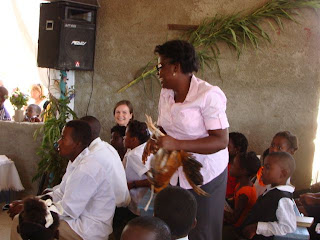 …but was eventually won by Wawa’s wife Josette who was bidding for Aunt Mary. Aunt Mary then gave the rooster to a family in the church to care for. 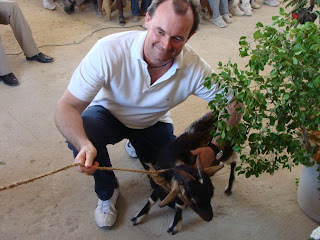 The biggest sale of the day though was this goat that Christophe Sosso bought for, very generously, way more than a goat would normally sell for! This goat is also being taken care of by a family in the church. 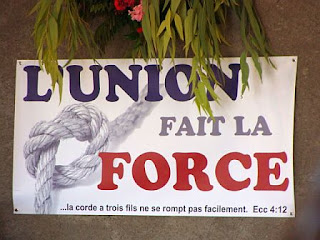 Our theme for Leadership Retreat this year was “L’Union Fait La Force” (Unity Makes Strength). This is written on the Haitian Flag as the country’s motto but in reality is very rarely practiced. 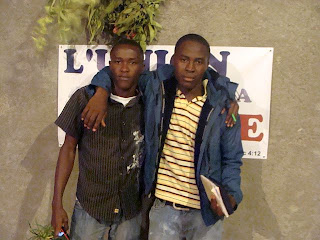 The group of about 70 youth and adults were split up into pairs, each person with someone they did not already know well, if at all. 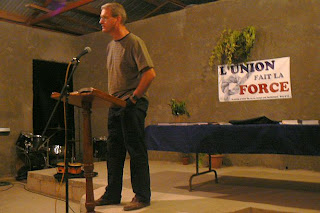 Pastor Jim Beerley (my uncle) did the Bible study based on the theme while Wawa looked at the subject of Leadership and personal Christian growth. 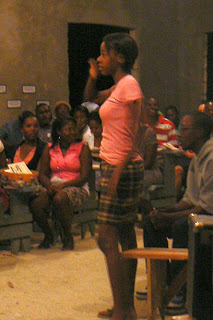 There were so many questions we never had time for them all but it was so good to see our youth and staff participating and interacting with what they were learning. 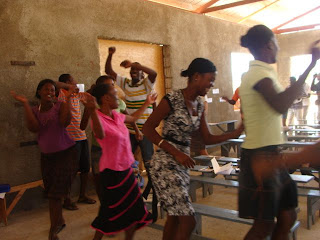 In addition to the studies we had some amazingly fun times of singing. At one point everyone left their seats and started running around the benches. It was hilarious! 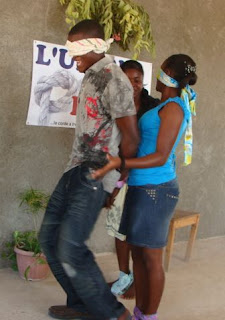 We also had some other activities based on our theme. In this one a group of 3 with different limitations had to work together to save a “baby” that had fallen in the water. One of the other activities that had a big impact was when we discussed different quotes. Four groups each discussed a quote, decided if they agreed or disagreed and had to determine what it had to do with our theme. One of the quotes that seemed to resonate a lot with everyone was this quote by Mother Teresa “We ourselves feel that what we are doing is just a drop in the ocean. But the ocean would be less because of that missing drop.” 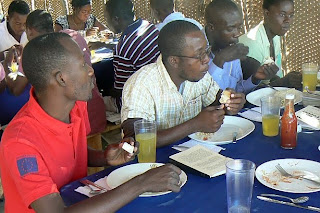 The table seating arrangements were made so that people had to sit with, and get to know, people they wouldn’t normally interact with. 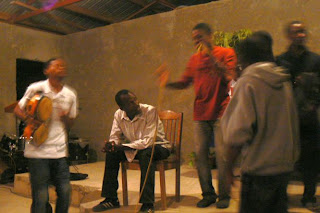 On the last night a group of guys improvised a song for staff member Wilson Cupidon who will be getting married in June. 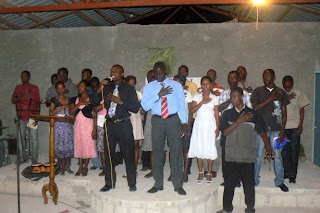 The group was split into two teams based on which side of the church they were sitting on. One was responsible for the Monday night program and the other for Tuesday night. Here the second team sings Haiti’s national anthem on the last night of retreat. It was so touching to see them both proud of their country and also singing with a new sense of understanding of the words.