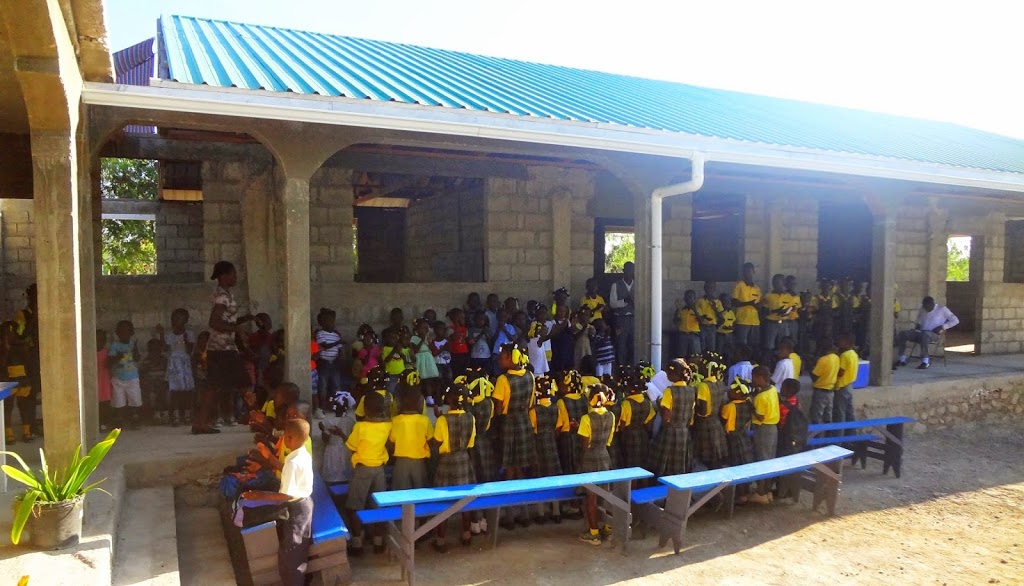 A highlight of the week in the school is Friday morning chapel.  Not only does it create variety in the schedule, but it enables the children to come together to sing and hear from God’s word every week. In addition, older children get the opportunity to develop leadership skills and confidence in public as they are given responsibilities in conducting the chapels.
In the future, a second story will be constructed over the offices and library (currently serving as the kindergarten) where events like chapel will take place.  But for now, squeezing under the school porch will have to do.

Widlika (not pictured) followed Jean-Thony with a prayer.  Nothing is precious quite like little ones squeezing their eyes tight shut (or leaving them wide open) in prayer.

As we begin the 2014-2015 work year, there are a few transitions taking place in Lemuel’s administration.  Below you will find a letter from Manis explaining the changes:

The new school/work year has begun! We praise God for His goodness and provision shown and His wisdom given in the launching of another year.

As we begin 2014-2015, I would like to inform you of some changes taking place in Lemuel’s administration. This month, my daughter Anya has begun her first year of school. She is being homeschooled, and although we tried to find a teacher for her, we were unable to do so. As a result, Judy will be teaching her. In order to devote her full attention and time to our daughter, Judy will be stepping out of her responsibilities as Lemuel’s General Secretary. We are very grateful for the many years she has faithfully and wisely served in this role.

I have asked Krischelle Frost to assume Judy’s position. Up until now, Krischelle has been working as Lemuel’s bookkeeper and a member of the administrative staff. She has been living on the Plateau and serving with Lemuel for four years, and is developing a deeper understanding of the people and the ministry of Lemuel. We have confidence in her capacity to fill the responsibilities of Lemuel’s General Secretary.

Judy will remain involved as a mentor for Krischelle in her new role. In addition, since she has always had a passion for quality education and a well-run school on the Plateau, she will serve as an advisor to the school and member of the school board that we plan to establish in the future. As a result of this decision, the majority of Lemuel communications once handled by Judy will now be passed on to Krischelle. This will take place as of this month, September 2014. Please feel free to continue to e-mail Judy with personal communications or questions you may have specifically for her, but all inquiries and exchanges regarding Lemuel can now be directed to Krischelle at krischelle.frost@lemuelministries.org.

Thank you for your understanding, your support, and your friendship. We look forward to the things God will choose to do this year on the Plateau.