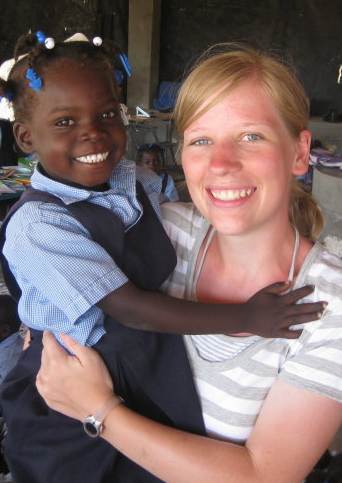 Tonight we received news that our dear friend, Anna Elgby, was killed today in a car accident.  Anna, along with Jon Stitt, was part of an internship program here on the Plateau in 2010.  She had such a sweet spirit and kind heart but at the same time had a great sense of humor and was quite a prankster!  What a joy she was to have here!  She brought so much life and laughter.  Anna befriended people that most of us had given up on.  She saw the good in people that nobody else saw.  Over two years after leaving Haiti, Anna still regularly kept in touch with friends she had made here.

One of Anna’s closest friends while she was here was a girl named Enide, a brilliant young woman who had had to drop out of school after having a child at a young age.  Anna promised her that she would do whatever she could to help her finish her schooling and she kept her promise.  Not only did she sacrificially help Enide, she would talk to Enide on the phone almost every week and encouraged her in her walk with God.  Just this week Anna had spent time praying with Enide over the phone that God would provide for her.  She always told Enide that she wanted her to know a “BIG GOD.”

Anna had written to me on Monday, but I did not see the email until tonight.  My heart broke as I read how excited she was to spend Christmas with her family.  Our hearts go out to her family at this time and to those she was closest to and our prayers are with them.  Particularly I want to thank Anna’s parents for allowing her to come down to Haiti and to be a part of our lives for those seven months.  You raised a wonderful daughter and she was a great blessing to us.  I cannot imagine the pain you must feel right now and I know there is nothing I can say that could alleviate that.  Please simply know that your brothers and sisters here on the Plateau are and will be upholding you and your family before the Father in whose arms Anna now rests, her Beloved Father.