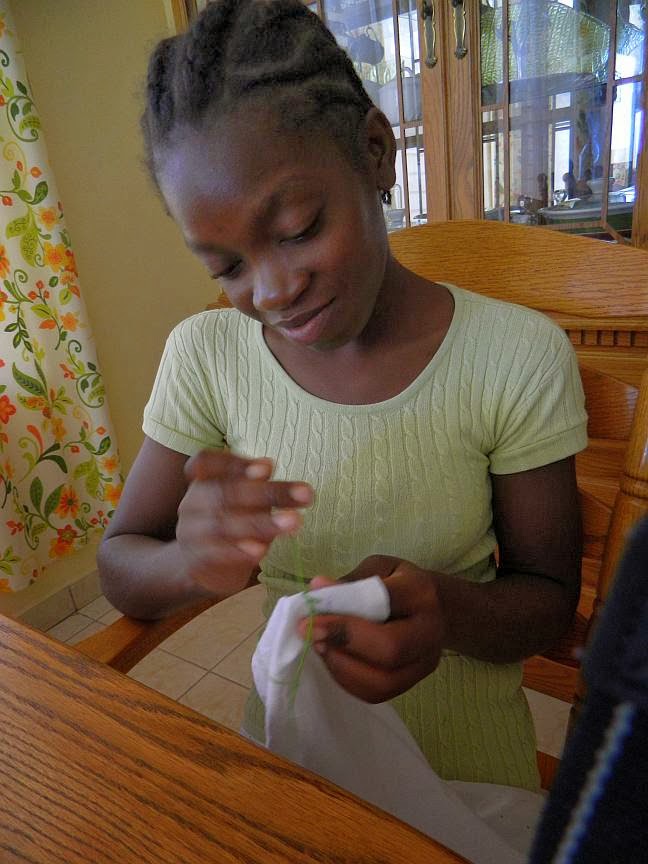 Thanks everyone for your thoughts and prayers over the last few days.  Mom, Walter, and Jason all got home ok, though there were some complications in travel due to all the ice and snow (on that end, not this one ;))  Ani and I ended up not having to go to PauP because a team of dentists is coming to Anse-Rouge this week!  Yay!

On Saturday we had a very significant event here on the Plateau!  Before I tell you what it was though, I should give you a little background.

In July 2006 I (Judy) came to the Plateau with my parents and some friends to fix up the Lemuel house where I would be living after marrying Manis in September.  The truck bringing everything for the house got stuck in customs and we ended up having a lot of free time.  While trying to find things to do and keep from stressing about the truck, I noticed four kids hanging around the yard.  I figured I might as well teach them a song to sing in church so I brought them over the porch and we started singing together.  All of the children were precious but one stood out to me particularly.  She was incredibly bright, picked up the song twice as fast as the other children and just had an overall eagerness about her.  I couldn’t get her off my mind and I decided when I returned I had to do something with this little girl.

Fast-forward about seven and a half years to this past Saturday morning… Modelene sat at my dining room table putting the finishing touches on a floursack towel that she has been embroidering.

Modelene (right) a few years ago with Mme Tiferne (center) and Josiane.

Modelene has been coming to our house every Saturday since shortly after I moved to the Plateau.  She learned to cook and clean with Mme Tiferne and we encouraged her to get involved in other activities and classes.  She was in my girls’ group two years ago, then continued in the program last year when Wiltha took over to teach embroidery.  Modelene did well in the embroidery class, so this year I have been working with her more intensely, teaching her to do the little figures that used to be the hallmark of Haitian embroidery.  Reviving this form of embroidery has been a dream of mine since I was in high-school!

As usual, Modelene is learning quickly and soon will far surpass me.  For months she practiced on little scraps of fabric – pouring hours into little images that no one but she and I would ever see.

About a month ago I told her she was ready to embroider a “real” product.

Every Saturday after helping me clean, she spent hours doing, undoing, and redoing the embroidery on her floursack towel.

On Saturday she finished.

And then, the significant event occurred… Modelene became the first local artisan to sell a product to our Natif Natal gift shop.  After finishing up and packaging her towel, Modelene and I headed over to Bonita’s office where Natif Natal (represented by Bonita) bought its very first local product.

Right now Natif Natal is a bookshelf in Bonita’s office where we sell souvenirs and gift items made or produced in Haiti.  Our dream, though, is that one day men and women from our own community can produce items to sell, thereby earning an extra income that can help stabilize their families’ economies.

DOB: 4 April 1995 Current Grade: Tenth
Siblings: 4 brothers, 2 sisters
Favorite Color: Orange
Favorite Food: Rice with pinto beans and chicken sauce
Favorite item she has learned to bake: Oatmeal bread and oatmeal cookies
Favorite meal she has learned to make: Chili and cornbread
Favorite item to embroider: Plantain trees
Favorite skill she has learned: “I have enjoyed all of them but embroidery is my favorite because I have been able to actually produce something with it.”
Brief Testimony: “When I was little my family never went to church and I didn’t know anything about Jesus.  When I started working with Mrs. Judy I started going to church but I didn’t really understand anything that was being said.  I went to children’s church and Sunday school but I didn’t really know what they were talking about.  Slowly, as I got older, things started to click and I started to understand who Jesus was and what He had done for me.  I continued to learn and to grow in understanding through devotions on Saturdays and in girls’ group, the church services, and youth group.  I finally understood that I should die for my sins and that God could never accept me.  But, because Jesus died in my place, God can forgive me.  Now, when I sin, Jesus says, ‘I died for her, her sins are forgiven.'”

After giving her first proceeds to the church, Modelene plans to put most of the money she makes into savings for future schooling and to help her family if they have a problem like someone getting sick.