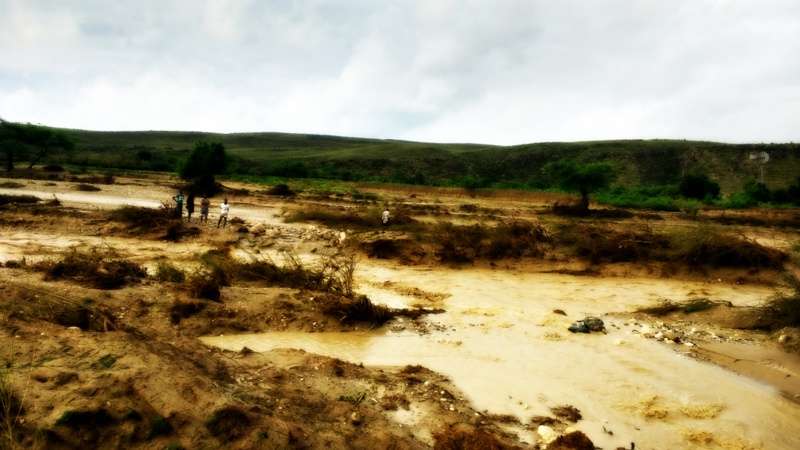 Manis, Judy, and I stood on their porch last night (Thursday) listening and looking at each other in amazement.  Out in the darkness, it sounded like ocean surf washing up on the shore.  We knew that water was coming down the ravine—more than we have ever heard before—but we could not see anything.

Believe it or not, it has been raining all week.  Everyone has been excitedly remarking to one another that we have not seen rain like this for years and years.  Those whose gardens were not destroyed by the hurricane have been planting.  We have been planting trees like crazy. Over the last five days, we have gotten nearly 6 inches of rain, on top of the 6+ inches that the hurricane brought.

This morning, we drove down to where the ravine crosses the road.  We stared in disbelief.  Almost the entire community was there staring too.

Water was still madly rushing through the ravine, which had been carved out deeper than ever. All of the trees and vegetation that had grown beside the ravine and in the broad spaces around it were ripped up, bowled over, and flattened.  It was almost unrecognizable.  I heard a man talking on his phone who said, “This must be Matthew’s wife who has come through!”

I said that the amount of water coming down the ravine from Hurricane Matthew was colossal.  It was true.  But that was nothing compared to this.

Normally, you shouldn’t even be able to see as far as you can see in this picture. Also, the water way in the background….that’s a garden under water.

Yesterday after darkness fell, a vehicle coming from Port-au-Prince attempted to cross the already swelling ravine.  It got stuck, and the people inside started screaming for help.  Several men from our community who live nearby waded out into the rising water and removed the driver and four passengers.  They tried to get the vehicle out too, but when the water rose up to their waists, they had to give up.  Within moments, the water carried the vehicle away.

Further up the ravine, we have word of a village taken out and several people killed by flash flooding.  Stories are coming out of Anse-Rouge about extensive damage, but we have not been able to go to there to assess the situation for ourselves, because we cannot even cross the ravine yet.

And even if we could, the once repaired road has been washed out again.  According to reports, it is even worse than it was when Matthew washed it out. This water also took out even more gardens than the first, and it undid any repairs to canals that had been done this week.

God is always in control, and He has not left us alone.  We rest in that truth.  We will keep you posted in the coming days.