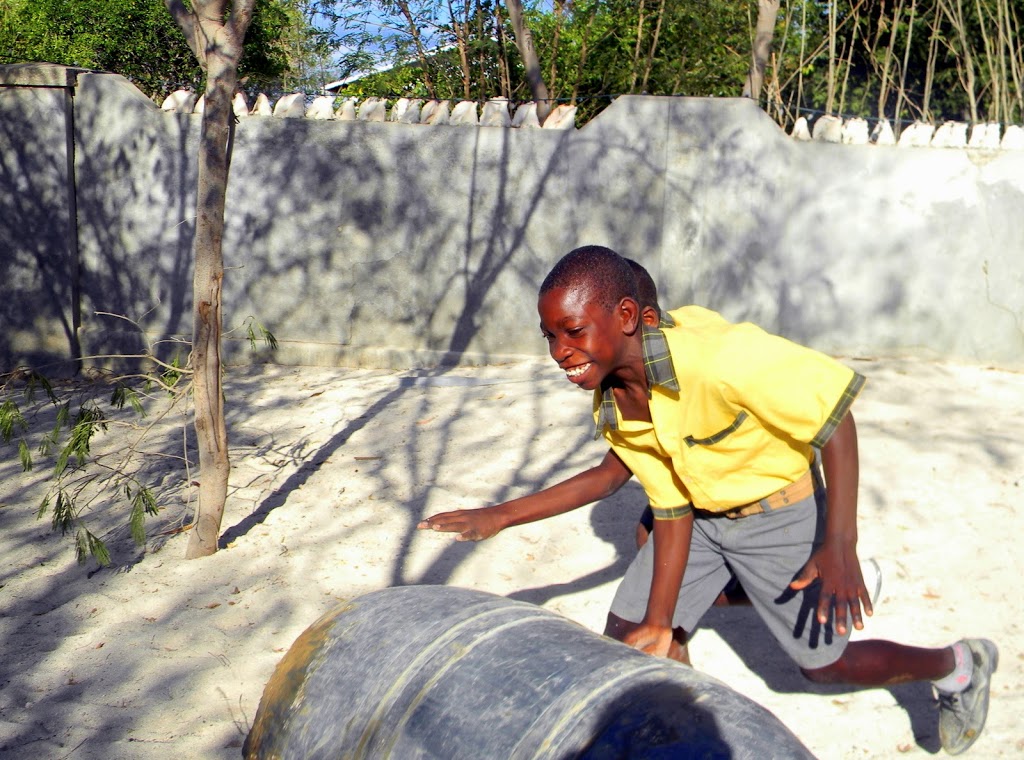 The school kids started off their day by watering the trees in the school yard. Unfortunately, the drought is once again having debilitating effects.

These boys rushed past me joyously rolling a water drum, racing against their friends (not pictured).

Boys will be boys….they can turn almost anything into a race car.  Most frustratingly, after I snapped one picture, the camera batteries died!  By the time I was able to change them, the kids were already done.
When Manis first started planting trees in this community, people told him he was crazy–that he was wasting his time and energy.  Now, watching the school kids participate in the reforestation of their community reminded me of a reality of which we often speak in Lemuel: The first, and even the second generation are resistant and slow to change, apart from a few stand-out individuals.  It is the younger generation who really carry the hope for a better future.  The things these kids are growing up learning and doing today–the things that are shaping them–are what will really transform this community.

After changing the batteries in the camera, I visited the men hard at work on the school latrine.

Perhaps you remember this picture from a blog post in 2012.  It was then that our school latrine began to sink into the ground due to waters from hurricane Sandy.  Since then, the kids have been using a provisional structure.

Thanks to a special donations from Missionary Aviation Fellowship-Canada and the Summit Church in Ontario, we have been able to begin construction of a new latrine!

A little bit later–right before lunch time–there was a soccer match between fifth and sixth grade.  As part of an initiative to plan more activities to enrich student life, the school is holding a soccer game every Friday for a few weeks.

(Obviously, they did not play on a full field or with a full team….or a full-sized goal, for that matter.)

The game attracted a variety of on-lookers, as foutbòl often will.

(In addition to those standing in the background to the left of the photo, the motorcycle to the far right was also stopped, so its riders could watch for a few minutes.)

Almaïs served as announcer and animator, surrounded by attentive fans.
Catch a little bit of the action in this video clip.
Sixth grade held out 1-0 for quite a while.  But in the second half, fifth grade came back with a goal, and the game ended 1-1.