Jean Legagneur was part of the first group of kids taken into the original “Barefoot School” in 1996. He immediately stood out as one of the brightest students and was one of the first to be sent to an outside school (the Barefoot School, or Orientation Center, prepared children to enter the 3rd grade in an already established school).

When Jean dropped out of school in high-school and made some other poor choices, we were deeply saddened. Though he was put out of the program several times, Manis kept taking him back because he knew the potential Jean had. Manis gave him a job in the Port-au-Prince house – cleaning, running errands, doing odd jobs… but he would always remind him of how much more he could do if he set his mind to it.

Today Jean is a teacher in, and director of, Lemuel’s new Orientation Center. Modeled after the original, students whose parents could not afford to send them to school are given the chance of an education. Jean has poured his heart into the school this year and looks forward to developing it further in the 2010-2011 school year.

One development that we had not foreseen was that many children whose schools were destroyed in the earthquake have ended up coming to our school. The number of students has almost doubled! This has been a great opportunity to reach out not only to these children but to their families as well (more on that soon!).

Please pray for Jean as he invests in these young lives that he will have wisdom and that God will use this role in his own life to mature him and bring him closer to Himself. 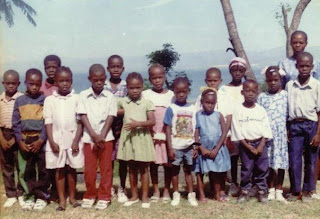 Jean (back row behind little girl in denim dress) in 1996 with the original “Barefoot School” children. 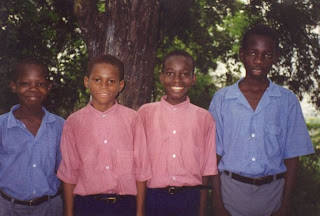 Abdonel, Jean, Auguste, and Seremond in their school uniforms after they were sent to continue their education in established schools. 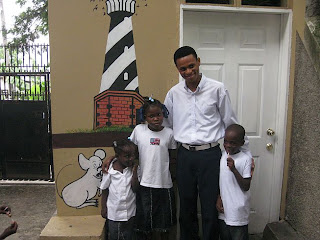 Jean today, in front of his office, with students form the Orientation Center.