I have decided that one of the ways I can maybe help you all feel more connected with what is happening here is by introducing you to the people we work with.  So, from time to time (I will try to do it regularly but no promises!!! :)) I will be doing a profile on someone.  So, without further ado… our first profile: 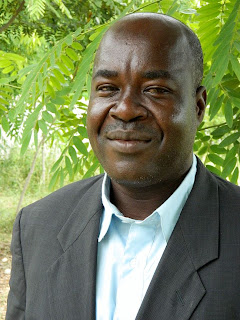 Lenique Tima was born in Anse-Rouge, the town closest to us here on the Plateau, on July 3, 1976.  His father, Icedieu Tima, was a carpenter and farmer.  His mother, StAnna, was a micro-merchant.  Lenique completed up through the sixth grade in Anse-Rouge.  He was then sent to live with a brother and sister in the city of Gonaives to continue his studies there.  It is common in Haiti for children to be sent into the cities for school, as the quality of country schools generally leaves much to be desired.
After completing high-school, Lenique went on to study Economics and then Library Science.  His first job was as the School Disciplinarian for a high-school in Gonaives.  Lenique returned to Anse-Rouge in 2007 to work as president of the Voting Office there.  During this time he married Kerline Branche-Dor, his long-time girlfriend, and became the father of a baby boy.  Today his wife and 5 year old son, Mackendy, live in Port-au-Prince where his wife is studying nursing.  They plan to join him when his wife has completed her studies.
In 2011, his job at the Voting Office completed, Lenique was planning to return to Gonaives to look for work there.  It was at that time that he happened to see a poster advertising that the Lemuel Primary School was looking for teachers and a General Director.  For Lenique this presented an ideal opportunity.  He preferred to stay in his own home town and work with others to improve the area than to work in some city with thousands of others and never see any difference from his efforts.   He just never imagined that he would be able to find such a job.
By the time Lenique applied for the job of General Director the role had already been filled.  We were so impressed with him, however, that we decided to create the role of School Administrator so that we could benefit from his participation in the school.  In addition to his job as Administrator, Lenique also taught fifth grade. 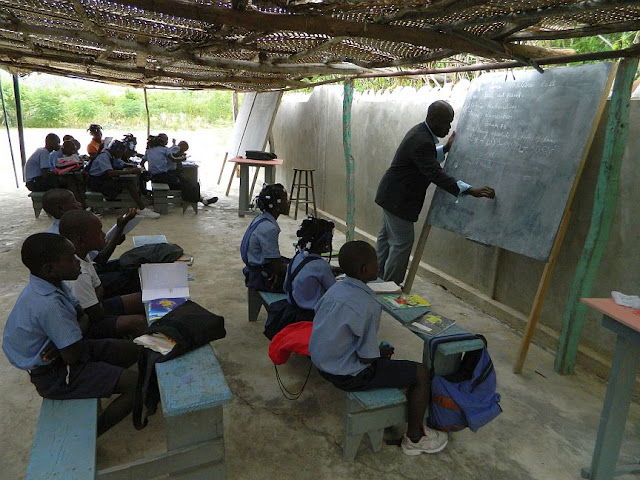 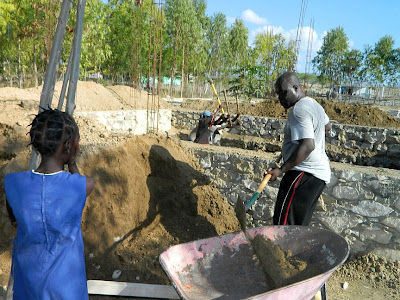 One of the things that impressed us the most about Lenique as he worked for us last year, was the interest that he took in everything that was going on within Lemuel and the community – not just in the school.  Lenique would come on Saturdays to work with the school kids to clean the campus.  When work as being done on the new school building he was right there out in the sun shoveling sand with the kids.  He even came over the summer, when the walls of the school were going up, to help however he could. 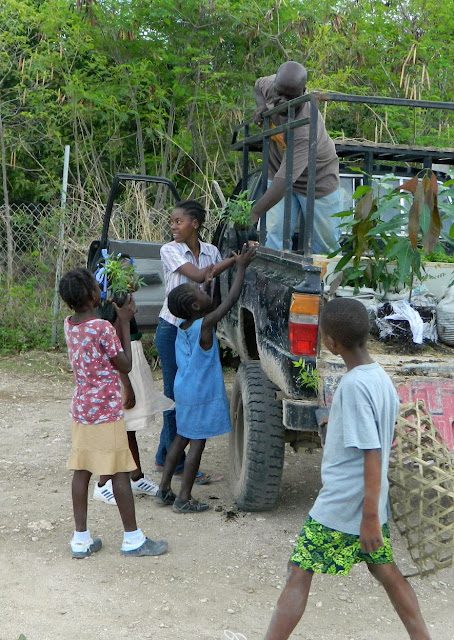 Handing out trees for the school children to plant on Haiti’s “Agricultural Day”
Seeing Lenique’s love for community development and noticing his commanding presence and the respect and he has gained in this community, Manis felt Lenique would be a perfect fit to work alongside Samuel in the development office.  While Sam works on the more technical side of things Lenique can interact with the people from the community and take care of the social side.  So, starting two weeks ago, Lenique made the switch from School Administrator to Administrator of the Community Development Office.
Sam is back home in Germany right now and activities haven’t really started up for the year but Lenique has already gotten down to business, clearing brush and thorns around Lemuel’s campus and encouraging families to clear the thorns from around their homes as well.  Some of the things he hopes to accomplish this year are: to work with the people to rid the area of thorns, continue work on the school building, begin the process of fixing/replacing the current fence with something more permanent and more effective at keeping the goats out!
List of Favorites:
Favorite Color(s): Black&White; Grey; Light Blue
Favorite Meal: Rice, Bean Sauce, Meat Sauce; anything made with flour
Favorite Music: French Ballads
Favorite Verse: John 3:16
Favorite Pastimes: Soccer; listening to music; chatting and joking with friends and co-workers; watching or listening to Haitian comedians
Favorite Memory from last year: Time at the beach with the Lake Tomahawk team 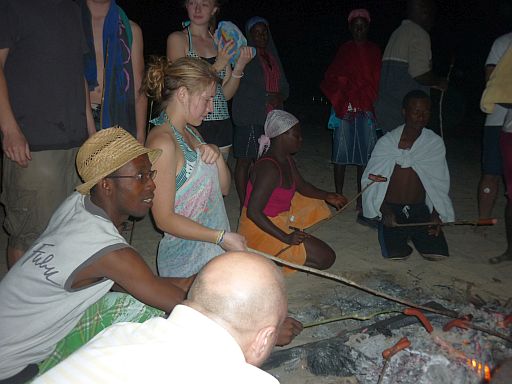 Lenique in background with Khaki/Grey Polo at the beach with the Lake Tomahawk Team
Favorite thing about this area: The ocean 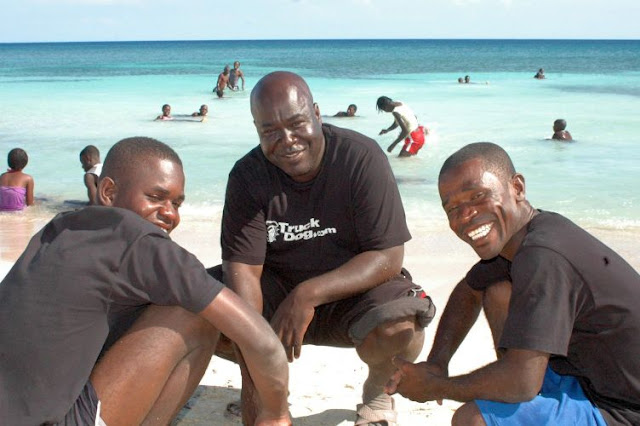 Lenique (with two other teachers at a youth beach day) and the beautiful ocean that he loves.
Prayer Requests:

1. That his family would continue to stand firm in their faith.
2. For his mother, particularly for her health: Lenique’s dad died suddenly back in July and the care of his mother has fallen to him and an older brother.  Her health has been fragile but is improving as she has been to the hospital and continues to follow medical care.   3. For God’s protection on his wife and son as they are far away in Port-au-Prince