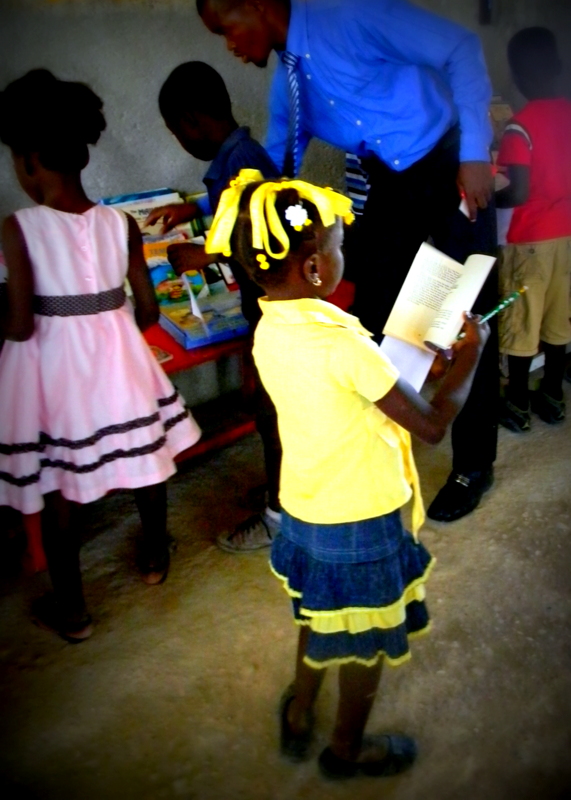 When School Director Almaïs told me that the school was holding a “reading day,” I was not sure quite what to expect.  I certainly did not anticipate walking into something like this!

They had arranged a room like a mini-library with tables full of books covering a variety of subjects.  Each child had a piece of paper and a pencil.  When they chose a book, they wrote the name of it down on their paper, and then they looked for a chair or table at which they could sit down and read it.  When they were finished, they took the book back and traded it for another.  (Just to give a little context: keep in mind that very few, if any, of these kids have ever even seen a library.  Many of them have parents–and certainly grandparents–who cannot read.  They have no shelves full of books to read at home…in fact, they’re lucky if they even have their own schoolbooks.)

There were even some other interesting materials available, such as periodicals  and laminated images.

Director of Pedagogy Osselet walked around supervising and giving suggestions.

Even the teachers found some interesting reading material!

The day had begun in the chapel with an exposition by Osselet on the importance of reading, along with a couple of reading tips.

Then, delegations from each class read a short passage from a book before the student body.  After they were finished, Osselet asked them some questions about what they had just read.

The spelling bee final closed out this unique day.  This is only the second spelling bee ever held on the Plateau.  It had kicked off a couple weeks earlier between grades 3-6.  Now, only third and fourth grade remained competing for first place.

Almaïs had aimed to make the spelling bee interscholastic this year.  He invited other schools to participate and compete with EML.  As far as I know, it would be the first interscholastic spelling bee ever held in the Anse-Rouge area! Unfortunately, he could only get two other schools to commit, so the idea had to be postponed for next year.  The bee went forward with only the students in our own school competing against each other.  However, one of the invited schools (students pictured above) attended the final anyway, just as a way to participate and show support.

Now, you might think that the sixth graders would easily win a competition between third-sixth grade….but, the spelling bee champion was actually third-grader Edjems!

We are so proud of the initiative and creativity shown by the school administration in planning school activities for this year.  If you are reading this from a North American context, activities such as the ones we’ve mentioned today may not seem particularly out of the ordinary. But for a primary school in Haiti’s countryside, they are decidedly EXTRAordinary.  These kinds of fun, engaging educational activities just do not happen.  I would even go so far as to say that for the Plateau, a reading day like this was a first-time, revolutionary event.  We are thankful for the opportunity God has given us to offer and encourage this level of education on the Plateau.

Now, just for fun: What caption would you give to the photo above?