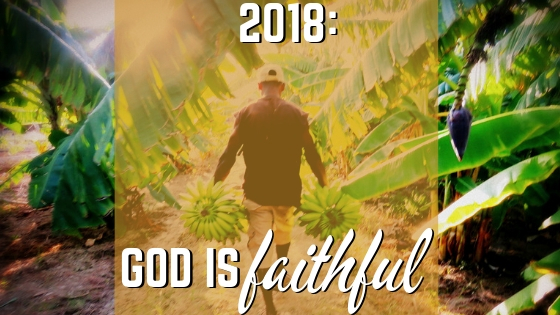 2018 was quite a year! As we reflect upon it, we could give example after example of God’s faithfulness. We will highlight a few of these on the blog in the coming days. Here is the first:

A harvest in the Lemuel garden…

One of our dreams for the Lemuel Garden land has been to create a place that can serve both as a blessing and an example to our community–a space where people could purchase local produce at an affordable price and a testimony of what was possible with reliable irrigation. When the new well was dug in 2017, it was a promising step forward.

However, we began 2018 with a major discouragement. On New Year’s Eve, a large irrigation cistern we had built for the garden cracked and was ruined. It was devastating news and very disheartening. However, it also served as a great learning opportunity for our staff, who unified to recuperate the losses and re-purpose the cistern.

As the year went on, we continued to irrigate the garden directly from the well. Plantain, banana, and papaya trees, along with other plants began to grow. Then the well went dry.

But thankfully, the trees had been given a good head start!

What an incredible blessing! On Sunday, Manis opened up the garden for people in the community to come get plantains, papayas, and sugar cane!

Who would have thought that in the middle of serious water crisis we would be harvesting plantains on the Plateau?!

This produce is food for families.

It is income for hardworking mothers.

It is joy in the midst of hard circumstances.

It is evidence of God’s faithfulness. Who would have guessed that a year that began with discouragement would end with such joy from the same place?