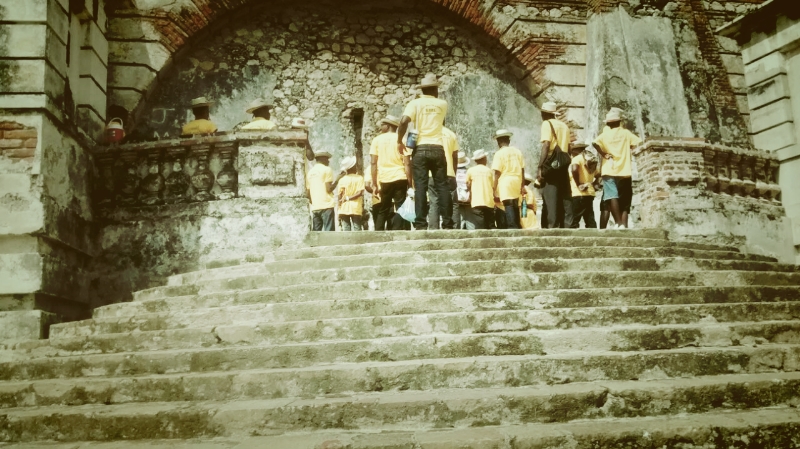 Last week, the school was able to make a special educational trip to Cap-Haïtien, a prominent city on Haiti’s northern coast.  The purpose of their trip was to visit the famous historical site of the Citadelle Laferrière, built by Haitian revolutionary figure Henry Christophe.  The fortress was built after Haiti gained its independence in order to defend the newly free country from feared invasions by the French.

It is a pretty impressive sight, and nothing like the kids have ever seen in person.

Only the 3rd-6th graders from the school went on the trip, along with all the school staff, 3 parents, and some of the older youth from CSSL (aka, kid’s club…all of the school children also attend kid’s club).  Their journey actually started on Tuesday night. Since they were leaving at 4:00 in the morning, they had a big sleepover in the church.  The kids were so excited!

The next morning, they began their long drive to Ocap (a nickname for Cap-Haïtien)

They arrived at the church where they would be staying in the nearby city of Limbé.  There they rested after their journey and spent their first night.

On the grounds at the church: Josiane (school receptionist), Nadege (kindergarten assistant), Mme Wisly (parent), and Rosemitha (one of the youth who attends kid’s club)

The next morning, they all piled into the bus to head for Ocap.  When they arrived, they received a guide to lead them and explain the history of what they were about to see.

Before beginning the long climb up to the Citadelle, they passed by Henry Christophe’s famous dwelling, the Sans-Souci Palace.  It was at one time a breathtaking, lavish place, but is now a ruin.  Teacher Thèrése strikes a pose in one of the palace’s abandoned hallways, once the venue of extravagant dances and parties.

The black-domed Church of Milot is also still standing on the palace grounds.

School director Almaïs even got a photo with Christophe himself!

Next came the arduous climb up the mountain to the Citadelle.  From what I understand, this is not for the faint of heart!

You can rent a mule or horse to take you up, if you like!

Almaïs said he was a little concerned about how the kids would handle the mountain.  Much to his surprise, they bounded ahead and reached the top with gusto!  Looks like they needed a rest once they got there, though.  (Notice the people just lounging around on what appear to be cannons in the background.)

Below, you can follow the kids on a portion of their tour of the Citadelle.  The guide explains the use of overhead windows (skylights, essentially) to light the fortress.  I tried to get subtitles in there, but encountered some difficulties.  He essentially says that in Christophe’s time, they mainly used candles and torches for light when it was dark.  But through the use of the overhead windows, Christophe was able to utilize the sun’s light to illuminate rooms during the day.  He then leads them back a passage.

Such a trip would have been unheard of for Plateau children only a couple years ago.  The chance to go and see and touch and experience is HUGE for their education and personal development.  We thank God for enabling us to give our school kids and youth (and the parents too!) such a rare opportunity.