Now that I am caught up with the New Years activities I can tell you a little bit about what has been going on since then!  Lots of exciting things have been going on!

First, we were able to start back up with the crochet project.  A group in Canada crochet’s milk bags (yes they sell milk in bags in parts of Canada) into mats and bags.  Thinking this may be a good source of income for our ladies here they have kindly provided the necessary materials so that we could give it a try.  We had to take a break while Krischelle was gone, as she is the only one of us who knows what she is doing with a crochet hook!

Now, that Krischelle is back and all the holiday activities are behind us, the program is back up and running.  Quite a number of ladies have dropped out, but the ones who have held in there and kept working at it are doing very well.  Most exciting of all, though, is that through the program we found out one of the ladies from a neighboring community is excellent with crochet and we have now passed on the supervision of the program to her.  This has provided her with a job and also taken one thing off of Krischelle’s overloaded plate.

We have a meeting with the ladies this afternoon so I will get some pictures then.

In further exciting news, we have FINALLY been able to reopen the women’s center!  Dadithe (Manis’ sister) spent November and December taking refresher courses with the lady who originally taught her to sew, and the center officially opened on January 7.  I visited on the 8th and to my shock and surprise they had already made little embroidered pin cushions!  They have certainly kept up the pace and many of the ladies have already made multiple items (in miniature).  The center opened with only three ladies but Manis found out that more wanted to come but were either too shy or their husbands wouldn’t let them.  He encouraged the shy and spoke with a few husbands and now there are seven ladies:)

Unfortunately the day I took my camera, my battery died after only a few pictures but here is a small taste for now. 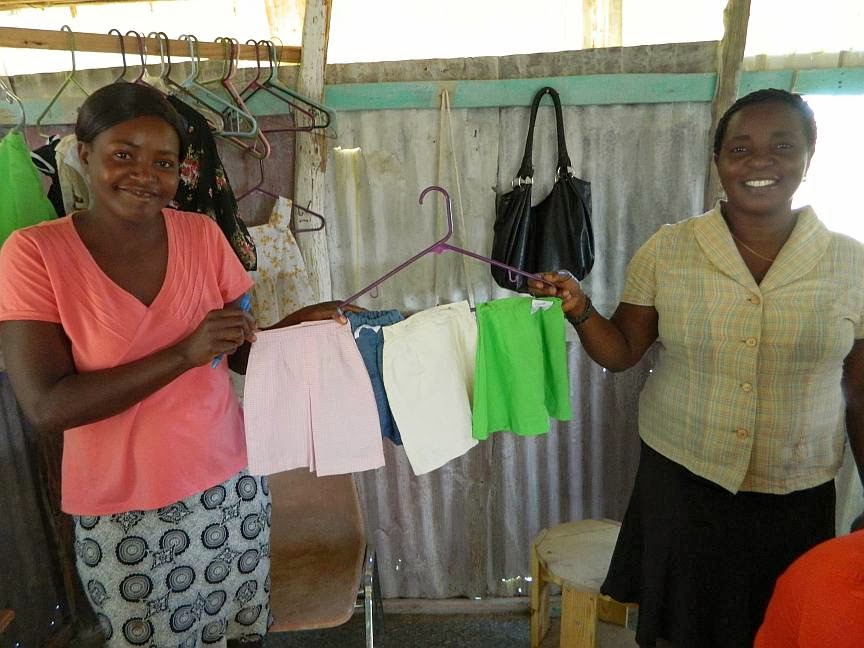 Dadithe (right) and one of her students, Obedda, holding up the skirts and shorts that Obedda has already made.  The girls haven’t learned to use the sewing machine yet so all of this was by hand. 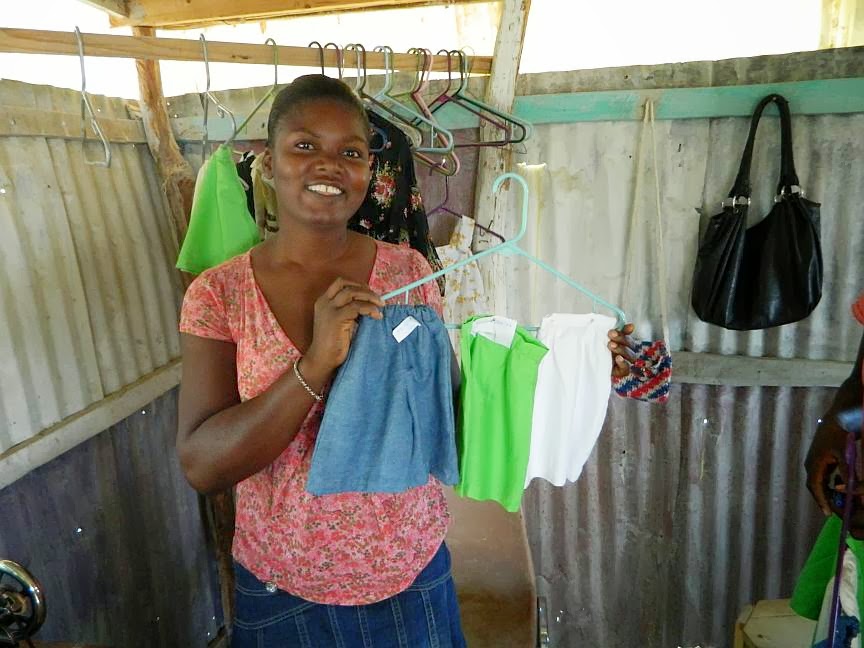 Venise, another student holding up her products… and then my camera died.
One a side note: The center is closed this week as Dadithe had to take her second son, Obed, to the eye doctor.  Obed has been having trouble with his eyes for a few years now, but on Sunday they got worse than ever, leaving him blind for several hours.  Obed, who is living with a friend in Gonaives in order to attend an excellent school there, is extremely bright, always the top of his class.  His mom has high hopes for him, and it was incredibly frightening for her to hear how bad his eyes had gotten.  She left yesterday to get him and take him to Port-au-Prince to see a very good eye doctor there.  I talked to her this morning and they were in the waiting room.  I know both Dadithe and Obed would greatly appreciate your prayers.
On January 10 my mom arrived and two days later Bonita’s dad and two other men arrived to begin work in her kitchen. (they were supposed to all get in on the 10th but there were some delays flying from Canada due to all the snow and ice).
As I sit here on my roof I can hear the electric saw as Walter, Jason and some of our guys work hard to get the first phase of the kitchen finished.  Bonita’s dad, Bryon, is not big into wood-working so he has been helping out with a ton of other things that needed to be done. 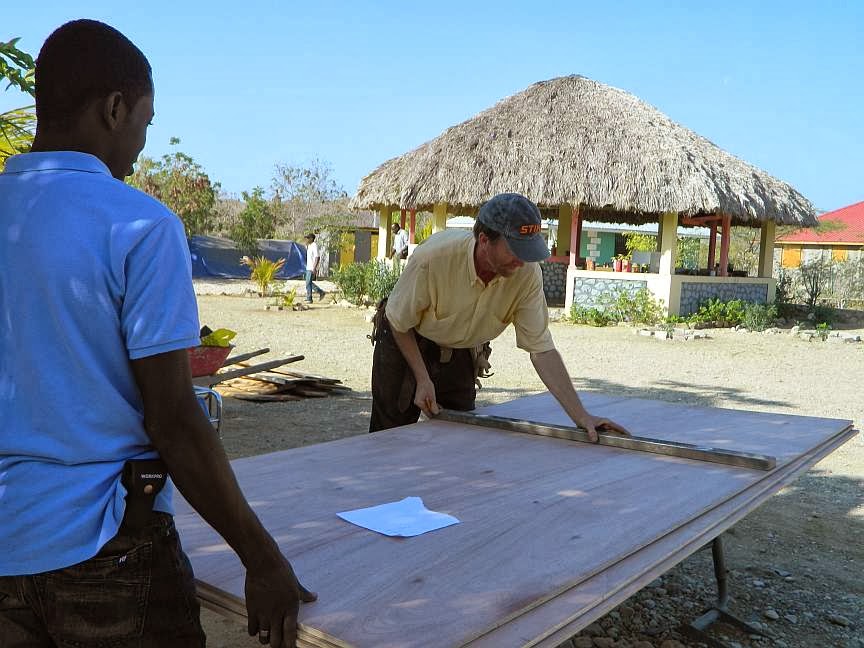 Walter and Lucson working with some plywood 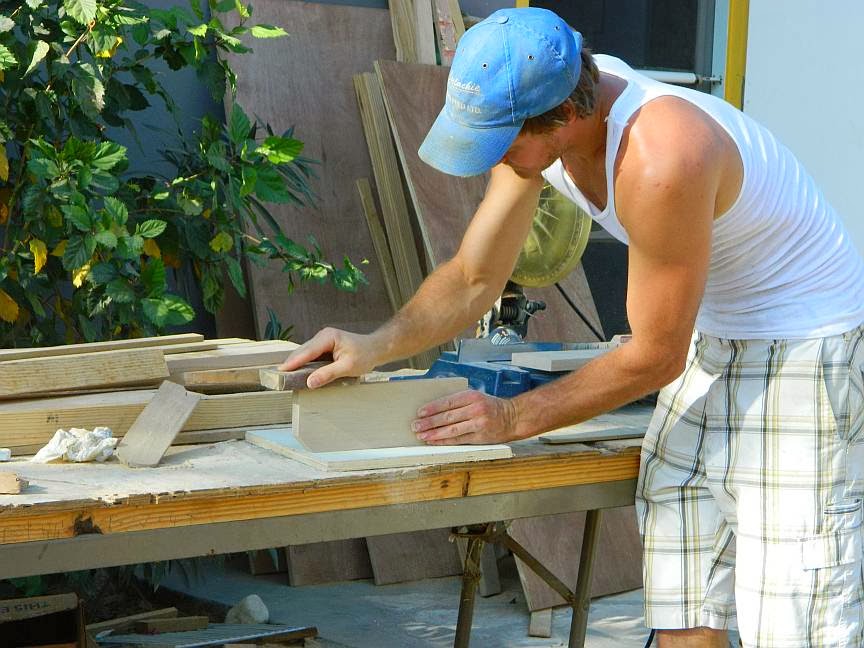 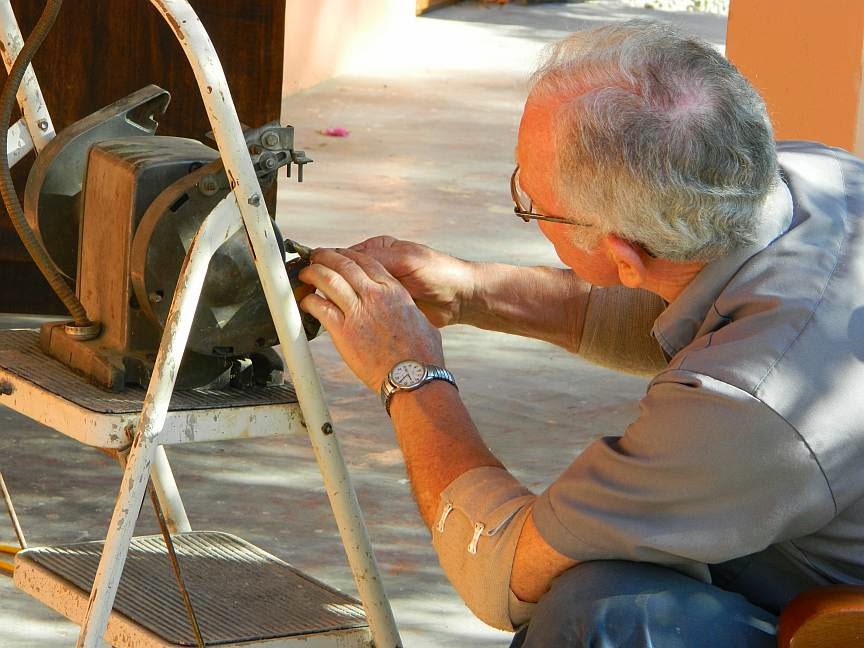 Bryon fixing something… I have no idea what that is 🙂
Others of our development staff have been working furiously trying to get the guest house completely finished for all the teams we have coming in February. 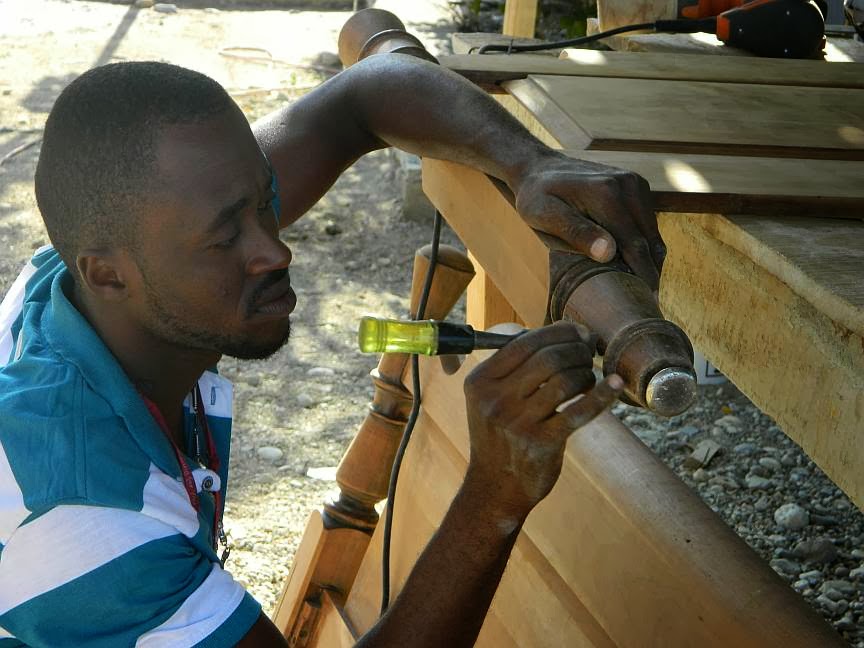 Robenson working on refinishing a bed for the guesthouse 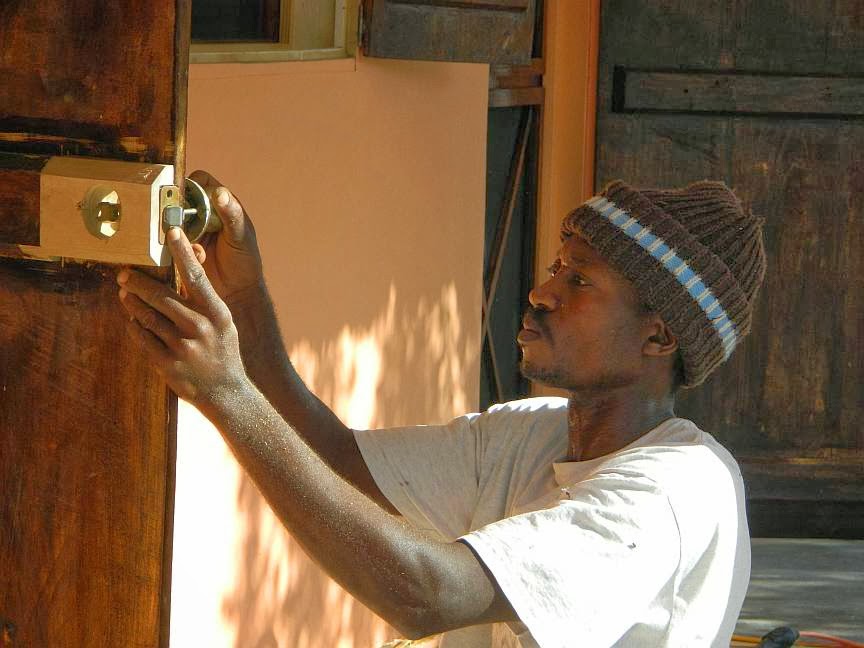 Guilbert getting the doorknobs put into the new doors he made for the guest house
Adding to the fun mix we’ve got going, Sam and Petion arrived back from Germany last Friday, bringing with them Sam’s mom! 🙂  She will be staying with us for three months so we are all working on our German 🙂  Actually, she is way better in English than any of us could hope to be in German. 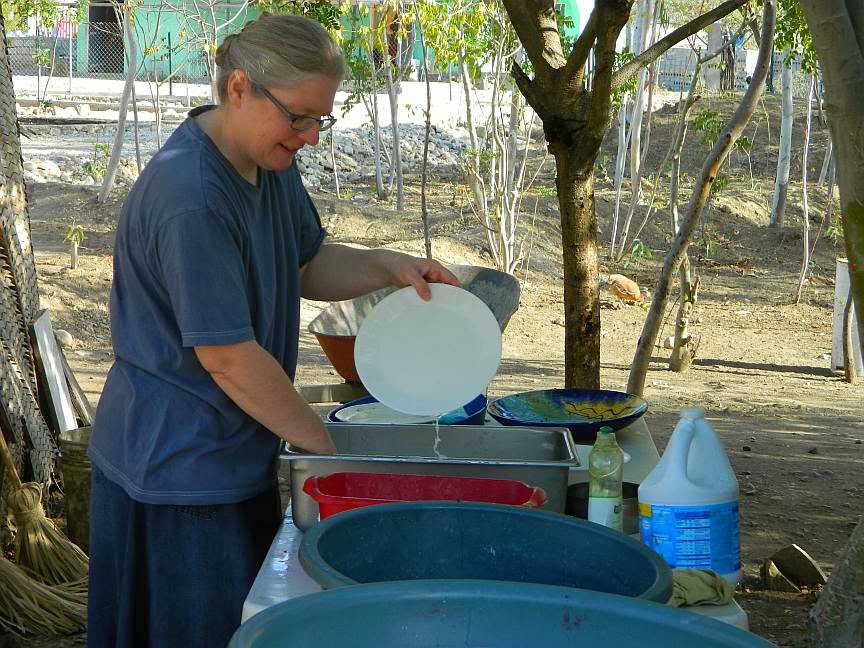 Sam’s mom, Anke Schafer, heling with the dishes this morning.
Mom, Walter and Jason will all be flying out on Friday.  Mom and I will be going into PauP a day early in order to take Ani to the dentist.  She has had soe pain in a tooth so we are going to look into what needs to be done.  I would GREATLY appreciate your prayers as neither she nor I are looking forward to this!
When I get back from PauP we will have one week of relative calm before the February storm 🙂  February will be a super busy month with teams and visitors back to back, an English Camp, and the school roof going on (YAY!!!)  We are greatly looking forward to everyone arriving and will try to keep the blog updated amidst the craziness 🙂