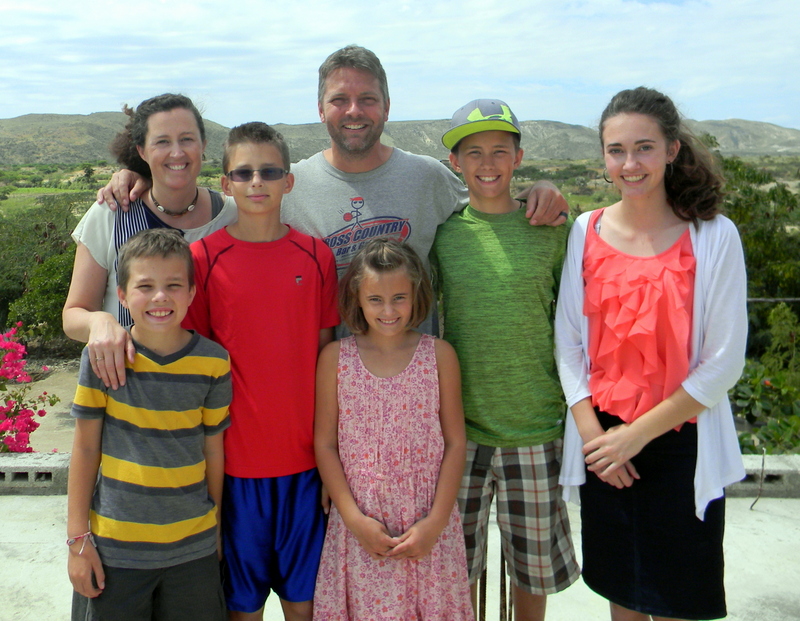 The Brunsch family has been officially living on the Plateau for four weeks now!  From left to right in the photo they are:  Danyel and Brad in the back; Dayne, Carsyn, Ryen, Brayden, and Shayne in the front. They are committed for the long-term, so we would like for you to get to know them a bit better.  Following is the story of their move to Haiti in their own words:

In November 2011, Brad Brunsch packed his bags and headed to northern Haiti for a short term mission trip with a local church. He considered this one week to be life changing. And so it was. The next few years involved many more trips, on a few of which he brought his two oldest kids. His love for Haiti, Lemuel Ministries, and for the people he had formed relationships with, continued to grow. And the rest of the family, seeing this passion—and some experiencing it themselves—formed a special place in their hearts for this far-away country.

So then in 2014 the instruction was clear: God wanted them in Haiti. The next two years involved selling their house, selling some personal belongings… as well as a bunch of random stuff.   (Lots of garage sales) 🙂  And though this time had various struggles for each member of the family, God showed Himself so evidently in the blessings and the trials. He stretched everyone in the way they needed, always with love. So overall, it was a great two years of preparation, change, and growth.

And now, here we are! We have been in Haiti for about 4 weeks and, at times, it can seem a little surreal. But things started moving right along as soon as we got here. The first team of the year arrived a week after we got to Lemuel. And since then, life has been pretty fast paced. But in a kinda weird way that makes it seem like we have been living here for a long time. (Hope that makes sense) 🙂 One of our bigger priorities right now is learning the language. This has been challenging, but also exciting!

Mixed in with all the different experiences and new people, everyone has had some moments of sadness over the family and friends left behind. But even through those brief times of hurt, there is always this undeniable peace of knowing this is exactly where our Heavenly Father wants us. And that is something that will be helping us through the hard times to come.

In the coming weeks, the Brunsches will continue settling in to their new home, learning language and culture, and getting to know Lemuel and the people in our community even better.  And already, they have been jumping in to help wherever they can lift a load.  Their role within Lemuel will include receiving teams and helping with communications, among other things.