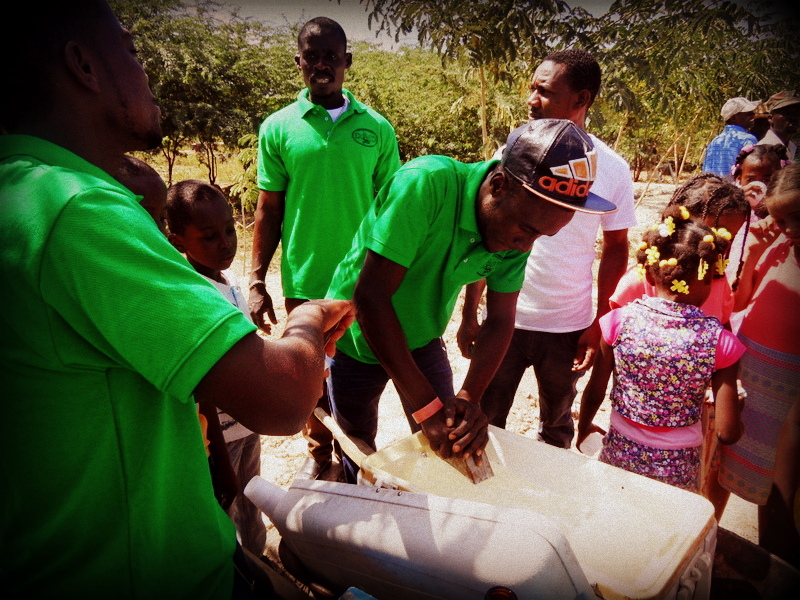 It is always a joy for us when we see our staff taking initiative and pride in investing in their community.  This past week, we saw this happen in two ways.

On Saturday, DDL (Lemuel’s Development Department) organized a community wide event to raise funds towards the purchase of a tractor for the community.  (This is a project we have had in the works, and you will likely hear more about it in the future. In the meantime, visit the Tractor Page for more of the story.) The event was held at Samuel’s Trees…

The best way I can describe it is as something between a fair and an outdoor market.  There was music, a fun ambiance, amusements for the kids, and spontaneous dancing! Many traditional Haitian treats were featured, such as konkinyòl (a donut-like pastry), bougonnen (like a popcorn ball, only made with puffed millet/sorghum grain), doukounou (a dense cake made with manioc flour, cane syrup, coconut, and ginger), and labapen (boiled water chestnuts).  There were also the usual food provisions for sale that most people need to make meals during the week.

Olence and Wesnet even went all the way into Gonaives to get ice so that they could make fresko (kind of like a snow cone) to sell to the kids.

All of us were so busy participating and enjoying ourselves, that we did not get any pictures that really do the event justice. People from many different surrounding communities came to buy, sell, or just see what was going on.  Leisure events such as this one are a rare treat in the Plateau area, where life is hard and resources are limited. It was a wonderful time for the community to come together and hang out. Fifty percent of all the profits went to the Tractor Fund, while the rest went to support Samuel’s Trees.

But most encouraging for us was to see the way in which the DDL staff worked together like a team, showing motivation and unity in pulling off this event.

Late in the afternoon, after everyone had left and things were cleaned up, Director Williamso gathered his staff together for some time to debrief and evaluate.  It was the first time we have held an event like this, and the feedback was very positive.

The following Monday was May 1, Haiti’s Labor and Agricultural Day.  The School is developing a yearly tradition of putting heads together with DDL to organize a community focused project of some sort for the occasion. This year, they cleared an area of land in preparation for reforestation.  The School staff brought out the kids in 1st-6th grade, and they all worked together with the Development staff to clear underbrush and thorns away.

Fifth grade teacher Fleurima works together with a group of boys.

The Development staff got in among some of the nastier stuff.

The theme of the day was “Kominote Pa’n Vèt,” which means “Our Community is Green.”  At the end of the morning, each person bought a tree from the nursery at Samuel’s Trees to plant at their home.

Classroom education is essential.  But getting out with your students and working together on tangible, community projects takes education to a whole, new level.  For our community, instilling this kind of perspective in the kids and applying it through action is literally revolutionary.

Later that afternoon, the School staff and the Development staff closed the day by facing off in a soccer match.  The School took the win, 2-1.

(But can I tell you what made me smile?  Soccer games are a big deal here.  Everyone gets very excited, and chanting, cheering, and even taunting are the norm. After the game, some of the School staff psyched the kids up in a victory chant/taunt.  They danced around the field saying, “Only 2-1!! We didn’t beat you too bad!”  But even as they chanted they surrounded different players on the Development team, patting them on the back and cheering them up.  The Development guys were bummed to have lost, but their faces lighted up again in big grins as the kids danced and laughed around them.  It was sweet to see such togetherness even in the midst of competition.)

As the soccer game was in full swing, I caught these little guys starting up an impromptu percussion section:

Can you hear what they are shouting?  “Kominote’m…VET!”  My community is green.  I think they got the message.