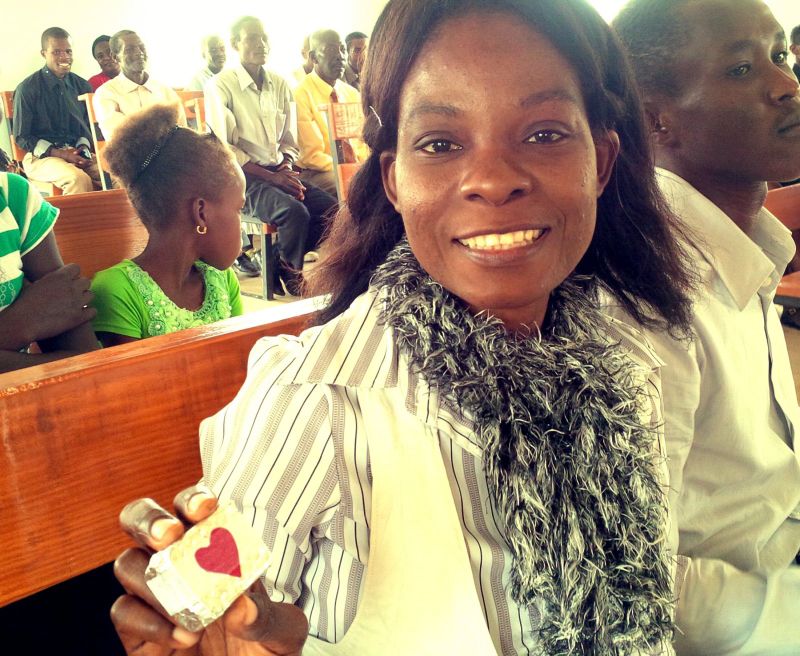 Well, my aforethought plans for a blog post were twice foiled this week. Don’t worry, they will appear sooner or later. In the meantime, I’d like to just give you a few snapshots from this week. Not only might it give you a glimpse into little things you may not normally hear about, but it will also provide a few teasers for some posts in the works!

This past Sunday, Samuel had a special gift for some people in church. First he asked all the married men to stand up. He gave them each a little Valentine’s Day gift for their wife: cookies wrapped in tin foil and decorated with a little heart. (I had chanced upon him and Bonita the night before painstakingly portioning and wrapping the cookies in preparation for the morning’s service!) He then asked all the married women whose husbands were not present to stand, followed by all the single ladies. Each one was honored with a cookie Valentine. As they caught on, people in the church called out that he must also give a gift to engaged ladies. Of course, there was only one–his own fiancee, Bonita!

In January, Manis initiated a new Wednesday night service in the church. It’s intention is both to provide a fun, encouraging ambiance and to facilitate spiritual and intellectual development. It includes Bible study, new songs, games, lots of laughter, and questions–complete with points and prizes for correct responses!

Wednesday nights are a blast, and they have been a real motivation for people in the Plateau church. More stories to follow!

Dreams in the Desert

We’ve got big dreams and plans for this seemingly barren piece of land. This is the Lemuel garden property where the wells are. We used to eat food from this land–pumpkins, congo beans, corn. It is good earth, but the drought has taken a serious toll.

We’ve got big dreams and plans for this seemingly barren piece of land.  This is the Lemuel garden property where the wells are.  We used to eat food from this land–pumpkins, congo beans, corn.  It is good earth, but the drought has taken a serious toll.

Consequently, one of my previous ideas for this week’s post was to do a video interview over at the land with Regilien–one of Lemuel’s earliest employees. However, the wind was blasting so hard, you would have heard nothing else! (“Why, hello, March, you’ve come in like a lion early this year.”)

“I’ve got this child to take care of,” said the young man, indicating the little five-year-old he was carrying against his shoulder. “We didn’t eat anything yesterday, because we had no water in which to cook the food.” His words touched Manis and Judy as they passed through Anse-Rouge that day.

Although Lemuel has helped several families build water cisterns at their homes, we have long desired to reach out to nearby areas by building community cisterns–larger cisterns that could be put under trustworthy community management and serve as a water source for the whole neighborhood.

This week, we were blessed to be able to begin the very first of these cisterns in a suburb called Nan Tiyo, right on the outskirts of Anse-Rouge.

The members of the community themselves are doing the construction–including the young man who spoke to Manis and Judy.  Manis took a moment today to see how things were going and to encourage and motivate everyone in their work.

Some of you who have been to the Plateau may notice something very important about this picture….the church has its own bright lights! A team in January installed the lights, as well as the church’s very own solar inverter system. What a blessing these have been!

Samuel has included a moment of prayer every Friday night specifically for persecuted Christians around the world. Tonight, we prayed for our brothers and sisters in Syria.

Speaking of the church and its new lights: Do you have any idea what you are looking at here?

It is the first church building on the Plateau!  This picture was taken in the early 2000’s.   If you attend Lemuel’s celebration of “20 Years of God’s Faithfulness” in April, you will see many more pictures and hear lots of stories of how things began.  God has indeed been so faithful. Please RSVP to lemuel20th@gmail.com in order to attend.  We would love to see you there!