It has been a while since we last posted! I (Judy) was in the US for a very full few weeks. I returned on Tuesday and am working on getting caught up on everything. So much happened while I was gone! The day before I left we were rushing to finish plans for four families who were ready to begin building brick homes (as opposed to mud). When I returned just three weeks later all the walls were up in every house!

When Manis first came to live here over four years ago he told the community that if they wanted to build brick houses, Lemuel would help them, but first they had to take the initial steps of saving money and collecting the majority of the materials. When they were ready, Lemuel would give them a boost to help them get started and then once the house was complete, would help them with the roof. Four families took Manis up on that offer and have been saving and gathering materials since then. It is so amazing to see what has taken so long for them to prepare for, actually coming to fruition. 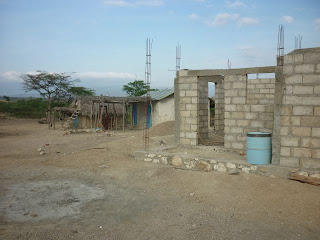 Marenn’s new house in front of her old mud houses. 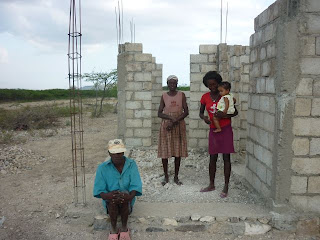 Mme Tiferne, her father and oldest daughter (holding Ani)
in front of their new home. 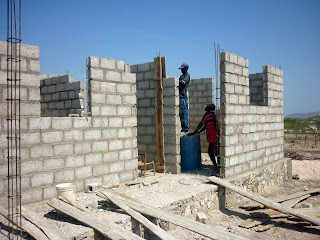 Obert and his brother-in-law working to complete their walls. 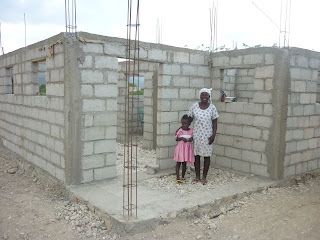 Wilda and her daughter Widlika in front of their new brick home.
Wilda also has 3 young boys whom she is raising on her own. 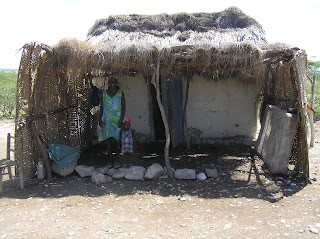 Wilda and Widlika in 2006 in front of their old home.

I was also amazed to see the progress on the guest houses. For some time we had been planning to build a few rooms that could be used for guests, teachers, work teams, whoever…! But after the earthquake, when we heard of some of the elderly moms of our kids in Port-au-Prince sleeping on the ground outside, we wanted to get them built as soon as possible. I have been so touched by how hard the men have worked to get the rooms to a point where they can be used. One group from Trinidad has already used them as have some of our youth from Port-au-Prince. Today they are working on “plastering” or covering the cinder blocks with a layer of cement in preparation for yet another work team! 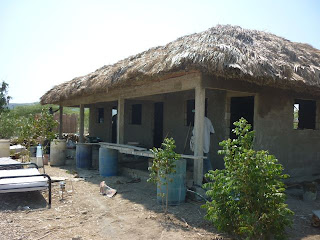 Tomorrow a team of six men is coming from Canada to put the roof on the church! You may remember that this team was planned for January/February, but that we had to postpone it due to the earthquake. In a sense, it was a good thing, because in that time they have actually found an even better way to do it! Please pray for their health and safety while they are here. On Tuesday when I arrived I found a huge group from the church all working together to get the floor poured and the walls plastered in preparation for the team. It was so touching to see women carrying heavy buckets of cement from where they were mixing it to where they were pouring the floor. They are so excited for the team to arrive and we are thrilled with the level of participation and ownership that the community has shown for this project. 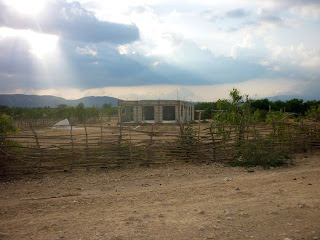 The church building, ready for a roof! Church committee members cleaning up around the church in preparation for the team.

It has also been exciting to see the “food for work” idea catch on in surrounding areas as three other communities have begun digging water holes. We have been able to pay them using food that MAF has provided. There was also a fair amount of discouragement to find that the huge water hole this community has been working on for so long has some technical problems. After one small rain they realized that the dirt that was so hard when they were trying to dig through it, turned grainy and just crumbled. The sides that crumbled then fell into the hole and partially filled up what they had worked so hard to dig out. We are not sure that it will hold up through any larger rains. We are looking into some possibilities for making it stronger but are also willing to move on if the soil is simply incapable of making a good water hole. Another, smaller hole that was dug before actually held up well and captured a lot of water so we may be looking at making that one deeper. 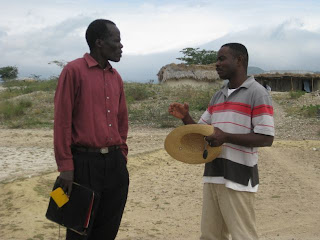 Manis talking with one of the Metsiyen community leaders. 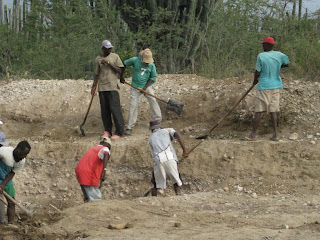 Working on the water hole in Plateau Atea. 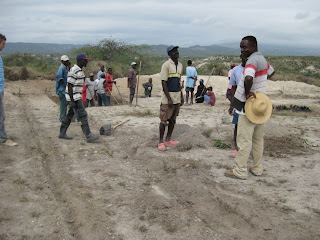 We have been greatly encouraged by the reports we are getting from our staff in Port-au-Prince. They, and some of the youth, have been providing activities for the children as schools have been closed since January 12. They have also held meetings with the parents and have been able to address some of the immediate needs. Any schools that are still standing will be opening April 6, and our orientation school is one of the few that fall under that category. We have been overwhelmed with parents wanting to put their children in our school, so our staff has been working hard in preparations to accommodate many more students. We are still awaiting news from the government regarding when reconstruction can begin.

Thank you all so much for your prayers and support, especially over the past 3 very difficult months. We have been privileged to see God’s hand at work and are excited to see all that He has in store for us and for this country.