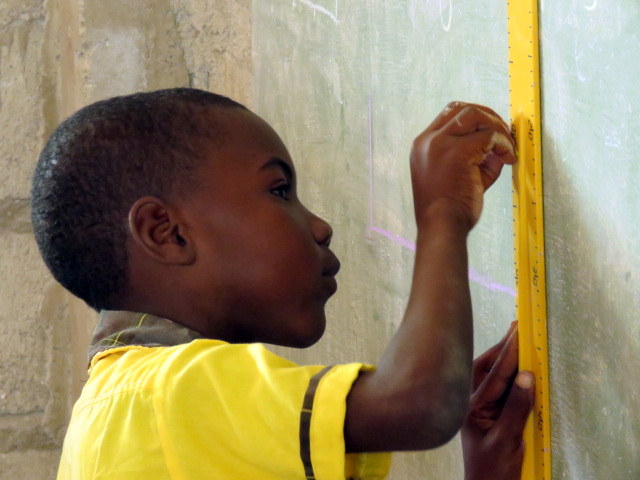 The first graders are new to primary school, having just graduated from kindergarten last year.  They have a new uniform and a whole new classroom structure and schedule to learn, in addition to all their subjects!  Their teacher, Rachele, does a great job helping them through that transition.  You will get to meet her in an upcoming blog post.

Here is what the first graders have been learning these days:

…or more specifically, geometry.  The class has been identifying the differences between the various shapes.

Isabel draws and labels a square.

Youdnaylove copies examples in her notebook.

Also in math, the class learned about halves, along with the doubles addition equations for even numbers (ie, 2=1+1,  4=2+2, etc).

Francesca colors in half a rectangle.

Issamaley considers the doubles equation for 6 = ….

And a fun little song for review!

In science, the class is learning about ways to take care of their bodies.  Specifically this week, they are learning proper dental hygiene. Here, Kayla has her teeth brushed…

…as the class looks on.

As part of Creole Communication class, the kids practiced their writing and spelling of different Creole words.

Neyima does an example at the board: pentad, or Guinea hen…something much easier to spell in Creole than in English!

To practice French, the class read a story entitled “En Classe” (“In Class”)…

It just so happened that on this Friday, the first grade class was also in charge of chapel.  The teachers and their classes take turns preparing and leading chapel every week.

The end of another week–it seems the school year is just flying!  Next up: “What’s Up in Second Grade?”