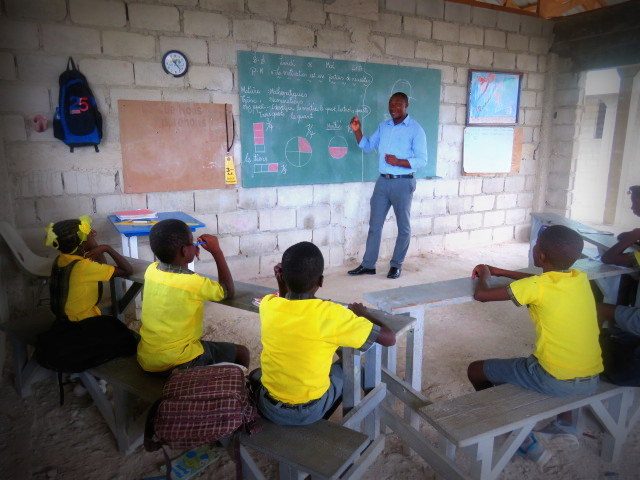 This week, we find out what is happening in the third grade class!

In this class, the third graders are currently learning qualitative adjectives…ie adjectives that describe the qualities of a noun (such as color, age, size, etc).

They are also working on singular vs plural.  In Haitian Creole, this is indicated by a second “word” following the noun.  Example:  moun nan = the person, while moun yo = the people.

In math class, the kids are learning about the radius and diameter of a circle.  Teacher Simon also demonstrated one-quarter, one-half, and three-quarters portions of a shape.

In science class, Simon talked with the kids about 7 diseases common in children, including measles, chickenpox, and tetanus.  They also discussed some ways to avoid these illnesses, such as getting vaccinated, keeping your living environment clean, and drinking filtered water.

(Unfortunately, I do not have any pictures of this subject.)

This year, grades 3-6 are doing French a little bit differently than the other classes.  The school hired a teacher to focus especially on this subject, and he comes to each class in turn to work with the students in French.  His name is Kenol (perhaps you remember his introduction on the blog?).

In third grade, they are learning direct vs indirect statements.

As a grammar review, that is the difference between saying, a) I said to my friend, “Your shoe is untied!” (direct) and b) I told my friend that his shoe was untied. (indirect)

They are also learning vocabulary for different modes of transportation.