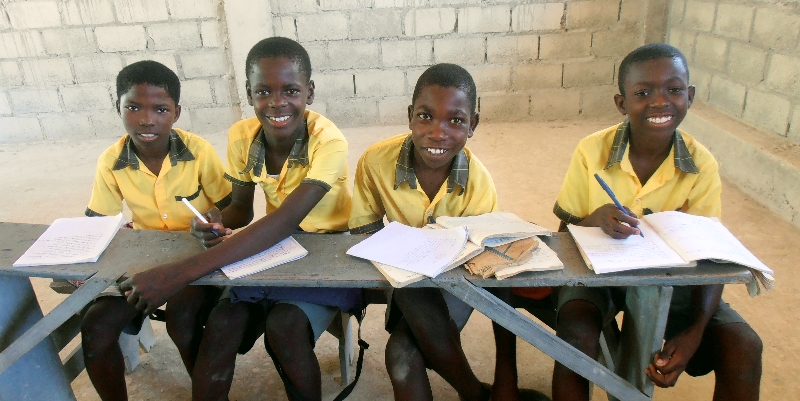 As the year begins to wind up (only 6 weeks of school left!), so we are nearing the end of our “What’s Up….?” series.  This week, we will look at what’s up in 5th grade….and then there’s only one more grade to go!

This week for reading, the fifth graders focused on a French text about Haitian food.

In French grammar, they honed in on verbs that end in -endre, -eindre, and -aindre…all those endings, essentially make the same sound. Below, Mackendy must identify the proper verb ending, and then write it in the correct conjugated form.  Eesh!

Cherlie came up to do one of the following verbs.

The practiced their conjugation of other verbs as well.  In the photo below, Berline is re-writing the sentence with the verb “aller” (to go) in the simple future tense (conjugated for the subject “we”).

And they also worked on qualitative feminine adjectives.  (French words have genders, and the adjective usually changes form to match the gender of the noun.)

Alright, that’s enough grammar and French!  In science class, the kids are studying animals and plants.  This particular lesson is about “Birds: The Flying Vertebrates.”

Below, Teacher Ronyl is reviewing with the class different types of birds and what makes a vertebrate a vertebrate.

…as well as problems involving the units of time (hours, minutes, etc).

Of course, there’s much more!  They practiced writing….

In Social Studies (which is not quite exactly equivalent to what we would call “social studies” in the States), they learned the mountains contained in the different sections of Haiti (geography).  They also looked at the cause of the American occupation of Haiti from 1915-1934 (history).

For Creole, they worked on vocabulary and grammar.

And in Bible class, the looked at the story of Zacchaeus, among other lessons.

There are quite a few fifth graders–17 students makes them the second largest class in the entire school!  Overall, their favorite subjects are Bible, French, Creole, and science.