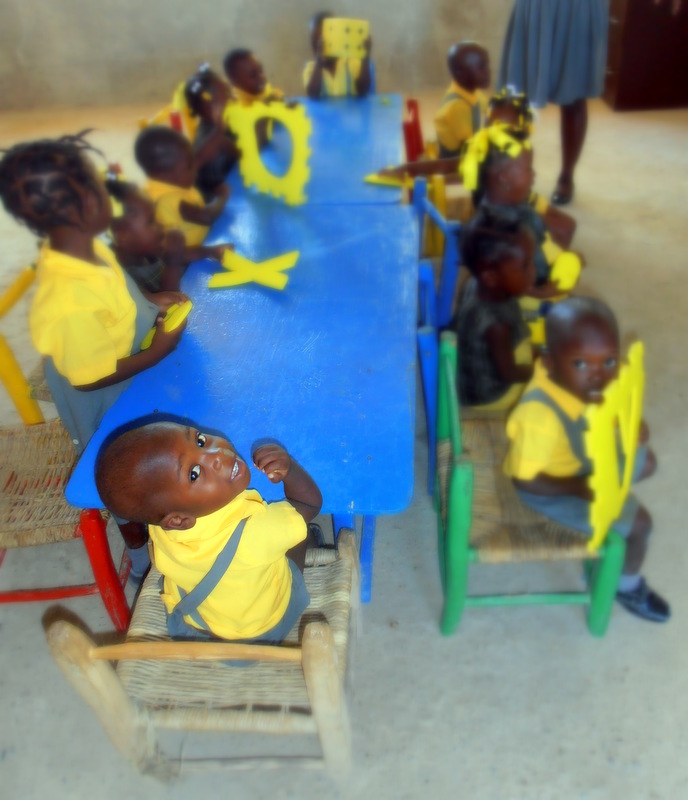 As part of our sponsorship blog, we would like to give you an inside glimpse of what each class is learning at a given time.  This week, we start with Kindergarten 1!

First a brief explanation of how the Kindergarten is set up:

There are actually three levels of Kindergarten–or Kin (pronounced “keen”) for short.  As a general rule, children in Kin 1 are pretty young…somewhere around 3.  After a year in Kin 1, they move on to Kin 2, and then to Kin 3.  From there they graduate from kindergarten and move on to primary school.  Kindergarten graduation is a BIG DEAL.  The kids dress up in formal attire, and they sing, recite, and dance to demonstrate all that they have learned.  Many times, the parents will hold a small reception at their house afterwards to celebrate.

Since the children in Kin 1 are not only very young, but are also experiencing school for the very first time, the initial weeks of their year consists mainly of helping them to adjust.  Their curriculum starts at the very foundation–learning fine motor skills, colors, numbers, basic social skills, etc.

So after four months, where are they now?

Well this week they learned about…

…the color yellow!  Kindergarten assistant, Nadege, is energetically helping them to say and identify “jòn” (or yellow, in Creole).

Teacher Marquise taught them about the parts of the head and face.

They practiced their numbers, 0-5.

They learned the seasons of the year.

And they spent some time scribbling–a warm-up to the skills of drawing and coloring.

They all love to show off their work!

In addition to these things, they are also learning:

-the difference between good smells and bad smells

-the difference between soft and hard

-that they should respect one another

-how to keep their bodies clean

-the name of their school and their class

-the names of some fruits–like bananas, mangoes, tomatoes, and oranges

Their three favorite things to do?

Answer: Play, sing, and draw on the chalkboard!